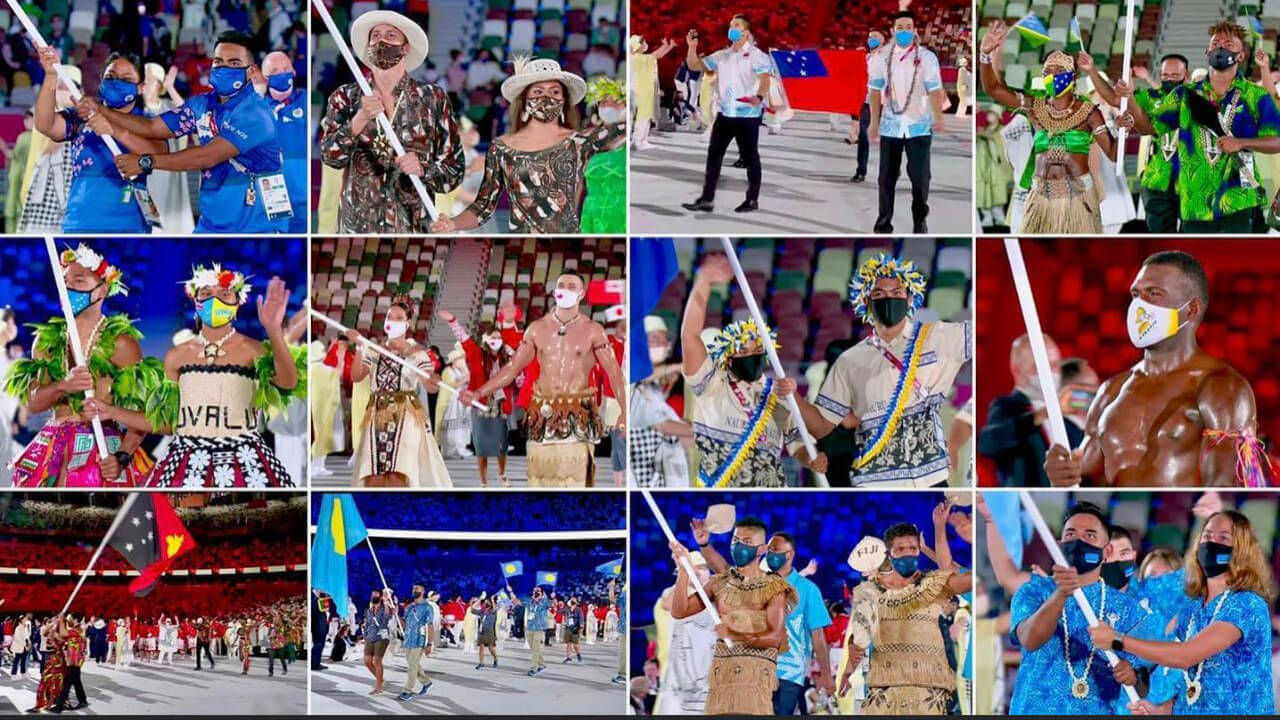 All the colours of the Pacific lights up the closing ceremony of Tokyo 2020. Pacific island communities are rich in culture and heritage where communal living and sharing based on reciprocity can go a long way to supporting children. | Photo: Inoke Bainimarama

The TOKYO 2020 RETROSPECTIVE is part of ONOC’s closing coverage of the XXXII Olympiad. It brings several reflection pieces relevant to National Olympic Committees (NOCs) and regional and national sporting federations.

Sport is part of human culture but its exact value in terms of culture remains unknown and unexplored. The fact that culture has not been valued in full economic terms, which unfortunately remains the current measure, adds to this complexity. Current trends in culture valuation resting on pinning economic value to the visual arts sector, museum visitors, gallery visitors, theatre attendances, and sales of art and craft, books, movies, television ratings disaggregates the culture sector further.

Still on this Western lens, sport, while a core part of human culture and successfully valued periodically, remains absent from most economic valuations of culture.

According to the Global Sports Market Opportunities and Strategies to 2030 Report, the value of the global sporting industry in 2020 was over $388 billion, a reduction of 15.4% attributed to COVID-19 pandemic restrictions. Its value in 2019 was $458.8 billion.

Interestingly, the same report looks to the pandemic-related exponential rise in sport for health, fitness and leisure; the rise of esports; and the slow ease of restrictions placing sports back on track to rise. Current projections estimate the global sporting industry will rise to $599.9 billion by 2025 and $826 billion by 2030.

In a Massey University research by Stewart-Withers et al, published in 2017, on the value of sports remittances by Fijian rugby players, the figure, in a conservative estimate, sat at F$18.5 million per year returning to the homeland.

The same study provided financial estimates of earnings by Polynesian professional athletes at US$200 million for NFL; US$100 million for rugby union; US$60 million for rugby league; and US$55 million for sevens rugby. Of the total US$415 million earned, if only 20 percent were sent as remittances to families in island countries, this would place it at about US$83 million. Again these are conservative estimates.

This contextual brief is provided to underscore the positioning of sport as part of culture: where it sits in the context of Western culture, and in terms of Pacific island culture, how communalism fuels remittances. This is not to say remittances are unique to Fijians and Pacific islanders.

Given this global context and drawing from the estimates provided, the value of sport to Pacific island economies cannot be ignored. The same has been emphasised by Fiji’s ambassador to Japan, Ambassador Isikeli Mataitoga, in the wake of Fiji’s double podium finish at Tokyo 2020.

The Fijian indigenous culture, which currently all national rugby players share, is rooted in communal living and sharing of resources. It has been the strength of Fijians and the same applies to Pacific island cultures in general.

However, there are cultural practices that are negative in nature which when not managed, impact athlete performance, and are important to note for sports planning and development.

Cawanibuka identified two - yaqona (kava) consumption which leads to inadequate rest, and the second, food choices which impacts nutrition. Both are cultural.

According to Cawanibuka, “When COVID-19 happened and we [men’s sevens rugby] went into lockdown, it was a blessing in disguise.

“It has been a very hard experience for our country and there are many losses and we all have family, friends and colleagues affected by the pandemic.

“As a team we had to go into camp not knowing when we would see our families again and there were moments when the team almost collapsed but we pulled through.

“Our being together for months meant we could implement our nutrition and rest programmes. Our nutrition is a huge issue as our non-communicable diseases figures tell us.

“The no sugar, no salt, and huge emphasis on healthy food applied to all of us,” Cawanibuka said.

“There were still challenges but it was easier to monitor this aspect of the programme because we were all living together and the team had to rally together with every player having to do their part.”

He said, “The traditional diet of our ancestors was very healthy as it was based on a lot of greens, local fruit, fresh seafood and root crops.”

This is now replaced with imported rice, flour, instant noodles, canned meats, and low grade and even rejected cuts of meat from other countries.

Coupled with the assortment of foods rich in fat, salt, added to increased consumption of sugar, salt and oils, this leads to the staggering noncommunicable diseases in Fiji and the rest of the Pacific islands.

This has an enormous impact on the health of Pacific island peoples and any intent they may have in sport for both social and economic development.

Cawanibuka says, “This may sound very simple but it’s not and this is why our athletes revert to their own dietary habits when they return to their homes whether in urban centres or in villages.”

This means that we do not have a sizable pool of athletes who make healthy living a lifestyle and we have to repeat the remedial cycle over and over again.

“This is our experience with men’s sevens rugby and it may apply to our island countries in the Pacific.”

He said, “The basic principles of discipline, honesty and integrity hold when we bring a team into camp and this can apply anywhere. Ideally though, these basics should already be part of a high-level athlete.

“Majority follow the rules and guidelines, then you have some who may be calling home for food to be dropped off at the gate with security so it’s a daily check in with each other.

“At the end of the day, it’s an athlete’s personal integrity and commitment to the larger team and goals to be met that matter and we as a programme have to manage this.

“One thing that we can be clear about is that talent is not everything. Rugby talent is everywhere in Fiji but this has to be with self-discipline, honesty and commitment to hard work.

“Yaqona drinking is a huge issue with young men in our country and it leads to inadequate sleep which makes a huge impact on athlete fitness.

“It requires huge discipline for a rugby player to say no to all kinds of food, yaqona and the company of friends in order to build a strong sporting career.

“There are many sacrifices to be made before you make the national team, land a good contract, or stand on the Olympic podium to collect a gold medal.

“It’s not easy given the background most of our young men come from where the culture is to drink yaqona until the wee hours of the morning.”

“But if we want to build a strong rugby industry and make it with the big names both in sevens and fifteens, then that will require big commitments from young men interested in pursuing this pathway.

“Have the discipline and the honesty and integrity to do the right things when no one is looking.

“This covers your sleep, your food, and personal training.”

THE IMPORTANCE OF FAMILY

On discussing the importance of self-discipline, honesty and integrity, Cawanibuka touched on family as the basic unit critical to individual athlete development.

“When it comes to boys, the father-son relationship is very important,” Cawanibuka said.

“We learn from both parents, of course, but I’m referring to men’s rugby and the culture of that.

“Self-discipline, honesty, and personal integrity are things we learn at home as these are the basics that our parents provide but boys need fatherly attention and quality time together in order to develop into men”

He added that, “In Fiji and other Pacific island countries where we have communal cultures and extended families exist, boys who may not have fathers around can benefit from guidance and role modeling provided by grandfathers, uncles, and older cousins.

“There is room in our communal culture to bridge the gaps that our boys may be facing but it’s good if families recognise this and step in for children because sometimes all they need is a word of encouragement.

Cawanibuka said, “As a boy I learned from both my parents and until her passing, my mother was the rock I leaned on.

“She was there for all of us and in the sporting area, for both my dad and I.”

He further spoke about the role his father, Alifereti Cawanibuka, played in his personal life.

He said, “My dream was to be a successful rugby player, not a coach, but that didn’t happen and I thank my father for giving me the guidance that has led me to this work in S&C coaching

“Most people know my work but everything I am in rugby is from him and up until today, he is the one who watches all our games, gives me analyses - even for all our games in Tokyo - he still does that.

“I’m so blessed to have him and we have a joke between us as to who has done better but I can’t compare to him, I’ve only coached rugby.

“My father has coached national teams in three different sports - rugby, volleyball and athletics so I’m never going to be able to match that.

“I’m sharing this because I can attest to the fact that for the discipline and integrity we need to make successful professional sportspeople, we need to pay attention to family.

“First from whatever circumstances we come from in our own homes and then in the ones we create.

“They could be very, very talented, but you can obviously see leadership, character, maturity, wisdom, decision making, all those kinds of things is lacking and so that is something we try and build into our programme - what I'm talking about now is this is ice under the water that people don't see.

“So we have a big Human Development Programme going within our circles, where we want to develop better sons.

“So whenever we depart from camp,  the parting message for us is that the family will welcome back home a better son or a better husband, a better father, a better leader and that’s the challenge.”

“Our work is rugby but we include all these elements because we can’t perform high-level if we don’t get the basics right,” Cawanibuka added.

“And that is really big because when you talk about performance on the global stage, it starts from these things.”

He said, “And a lot of that comes from relationships, off the field, you know, behind closed doors, our vessel is based on trust, communication, getting to know the person better.

“It's never a perfect situation, because you're always chasing, you know, excellence.

“And I guess Ben [Ryan] put it quite simply, five years ago, when he said, ‘aim to be the best version of yourself’ and really, that’s it.”

The strength of communal sharing rests on the principle of ‘sharing’ - mainly on reciprocity - meaning a constant flow of equitable exchange so that all members can be assured dignity, sustenance and a chance at thriving in a sustainable manner.