The United States Olympic and Paralympic Committee (USOPC) was established in 1894 and its headquarters are in Colorado Springs, Colorado. The Chair of the USOPC Board of Directors is Ms Susanne Lyons and its Chief Executive Officer is Sarah Hirshland.

It is one of the only National Olympic Committees to manage both the Olympic and the Paralympic Games teams of its country. The USOPC focuses on protecting, supporting and empowering America’s athletes. It is responsible for preparing U.S. teams for the Olympic, Paralympic, Youth Olympic, Pan American and Parapan American Games.

‍
Partnership Highlights
ONOC and the USOPC have shared a long and valued partnership over many years with several key highlights. The relationship was pursued in 2006 with then ONOC President Kevan Gosper reporting intentions to develop closer links with USOPC (then USOC) through the latter’s establishment of their International Relations Office in California. Gosper met USOC President Peter Ueberroth and the initiative was developed by partnership efforts earlier  established by ONOC’s Brian Minikin.

Following the ONOC Annual General Assembly in Pago Pago, American Samoa which was attended by Dragomir Ciorosian, the Director of the USOC’s International Strategies and Development, Dennis Miller the ONOC Executive Director visited USOC Offices in Irvine, California and the USOC Olympic Training Centre in Chula Vista in December 2007. This visit resulted in ONOC and USOC agreeing to further explore collaborative efforts in athlete attachments in the USA, coach education programmes and support with NOC management and administration.

The ICECP Programme
A year later in 2008, this resulted in the USOC and the University of Delaware sponsoring two Oceania coaches to attend the International Coaching Enrichment Certification Program (ICECP). This programme continues to be rewarding for ONOC Continent coaches. The same year, Dennis Miller attended the USOC 2008 PLAYS (Pipeline Leadership for America’s Youth Sports Program) Conference. The focus was on ‘Long Term Athlete Development’ (LTAD) which had deep relevance for Pacific islands models for athlete and coach development.

The USOPC ONOC partnership continues to be strengthened thanks to USOPC President Susanne Lyons and Chief Executive Officer Sarah Hirshland’s commitment to serve the global Olympic and Paralympic Movements as an engaged partner. USOPC have continued to maintain close communication with ONOC on a staff level, which has resulted in closer coordination in identifying areas of collaboration. This included collaborating with ONOC on inviting Flip Flippen to conduct a half-day leadership workshop for ONOC NOCs, on ‘No Team Can Rise Above the Constraints of its Leadership’, based on Flip’s New York Times best-selling book, “The Flip Side: Break Free of the Behaviors That Hold You Back.” The workshop was well received by the ONOC NOCs given Flippen’s ability to connect on a personal level, while bringing a compelling message to Oceania on valuing and celebrating Oceania’s unique close-knit culture and communities, which serves as a strength and an example to what much of the world is missing in their societies. 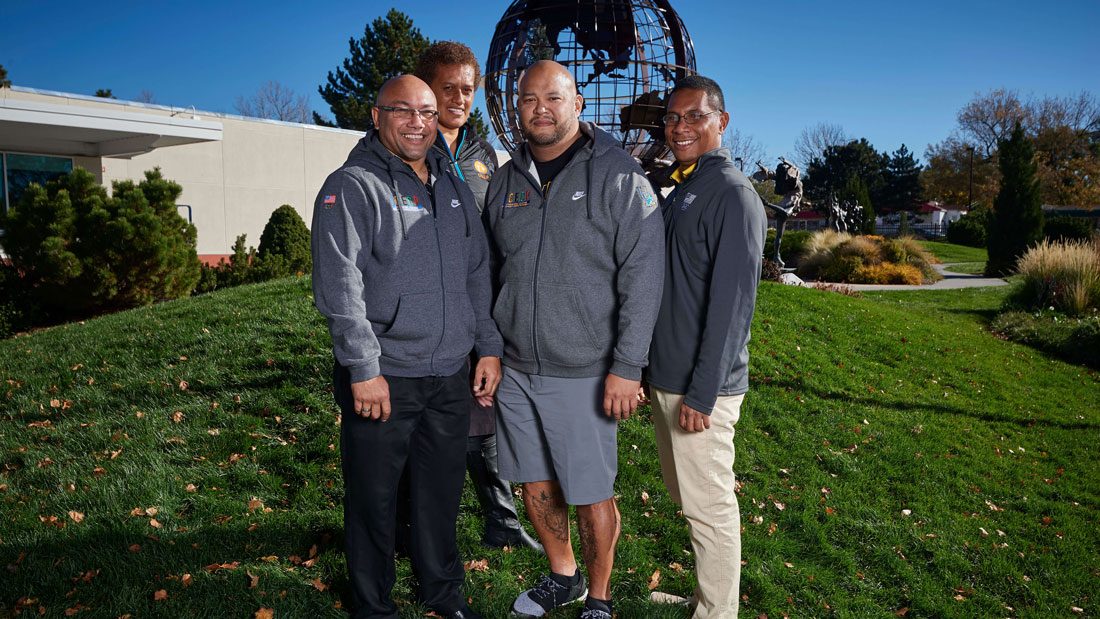 The ONOC and USOPC partnership has brought enormous benefits for Oceania sport through the development of coaches and athletes. Areas of cooperation initially included athlete training camps at the Colorado Springs Training Center; ONOC NOC coaches participation in the ICECP program; and funding sport referees and umpires to support the Micronesian Games. In 2017, the USOPC International Relations Commission supported two staff of the ONOC Oceania Sport Education Programme (OSEP) and one OSEP Educator to be part of the ICECP and observe their Olympic Training Center in Colorado Springs.

The LTAD Framework
In the same year, Carolina Bayon - USOC Director International Cooperation and Policy supported two speakers - Chris Snyder, Director of USOC Director Coaching Education and Richard Way, CEO of Canadian Sport for Life to attend the Oceania LTAD  Symposium with her. Their shared technical expertise contributed to the symposium goal of collating the building blocks of what has now come to be known as the Pacific Long-Term Athlete, Sport and Physical Activity (PLTASPA) Framework.

Joint Research Activities
Furthermore, from 2019 - 2020, the USOPC and ONOC partnership also saw the completion of a USOPC research study on the relationships between ONOC NOCs and the Ministry or Department of Sport in their various Pacific island countries. The research will serve to inform ONOC and its Member NOCs’ approach to strengthen partnerships with Pacific island governments. USOPC will continue to work with ONOC’s Sport Education Programme, OSEP, on this project.

The USOPC Strategy & Business Consulting division has worked with ONOC to conduct a survey and gather data from ONOC NOCs and government ministries in order to be able to provide some recommendations for better coordination and resource allocation alignment between NOCs and their governments, together with ONOC. ONOC identified this area of support as ONOC has been undergoing a series of assessments to prepare for the 2021 – 2024 quadrennial and beyond. The USOPC Strategy & Business Consulting division is further contributing to supporting ONOC by creating individualized analysis reports detailed by country aimed at supporting NOCs and Sport Ministries in developing resource allocation collaboration strategies for the 2021 to 2024 quadrennial. 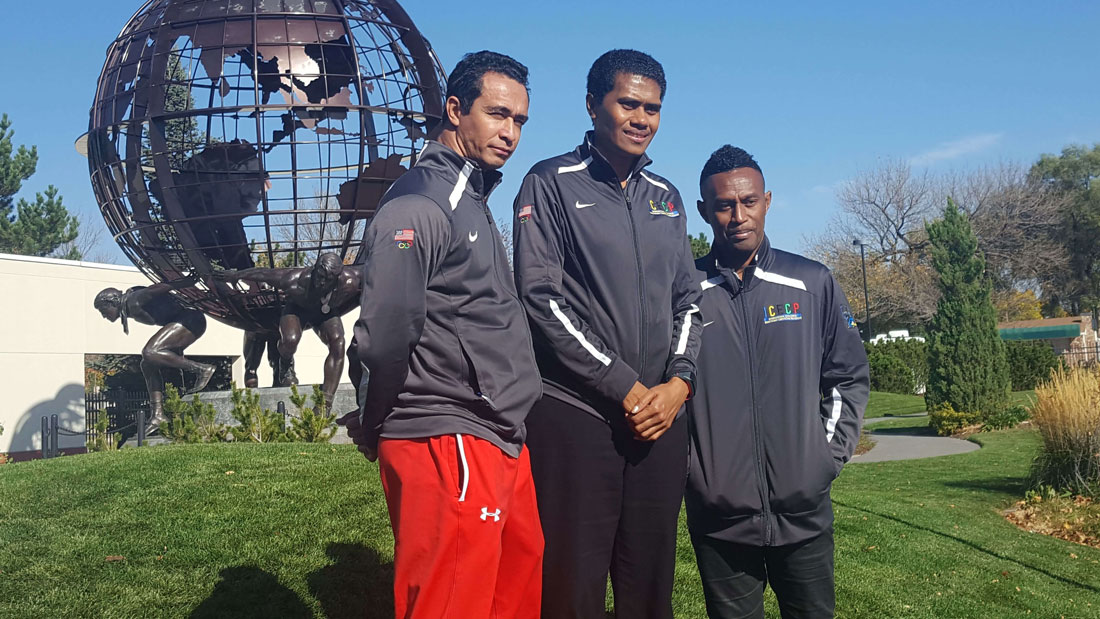 (L-R) Edward Kassman (PNG), Makelesi Bulikiobo (FIJ) and Francis Manioru (SOL) at USOPC, Colorado Springs in an ICECP Exchange.
The programme has contributed to the lifting of coaching standards in Oceania.

Through the ICECP National Courses, USOPC will extend a world class coaching educational opportunity taught virtually by Team USA’s Sport Performance and University of Delaware experts, as well as other leading international professionals in their respective fields. The curriculum includes close to 60 courses/hours within the following eight modules: Art and Science of Coaching; Coaching Leadership and Ethical Aspects of Coaching; Athlete Development; Sports Psychology and Mental Preparation, Sport Performance Nutrition, Sport Physiology and Training Design; Biomechanics and Sport Technology; and Athlete Performance and Wellbeing. The curriculum is delivered virtually via the University of Delaware’s Canvas Learning Management Platform (accessible online or via a mobile application), and through in-person or virtually practical coaching educational sessions facilitated by ICECP Course Facilitators (ICECP international graduates).

This partnership has active projects in its relationship and updates can be followed through ONOC news and social media channels.


Oceania ICECP participants
The ONOC USOPC partnership has benefited both coaches and athletes in the Oceania Continent. Following is a list of countries that have benefited so far.