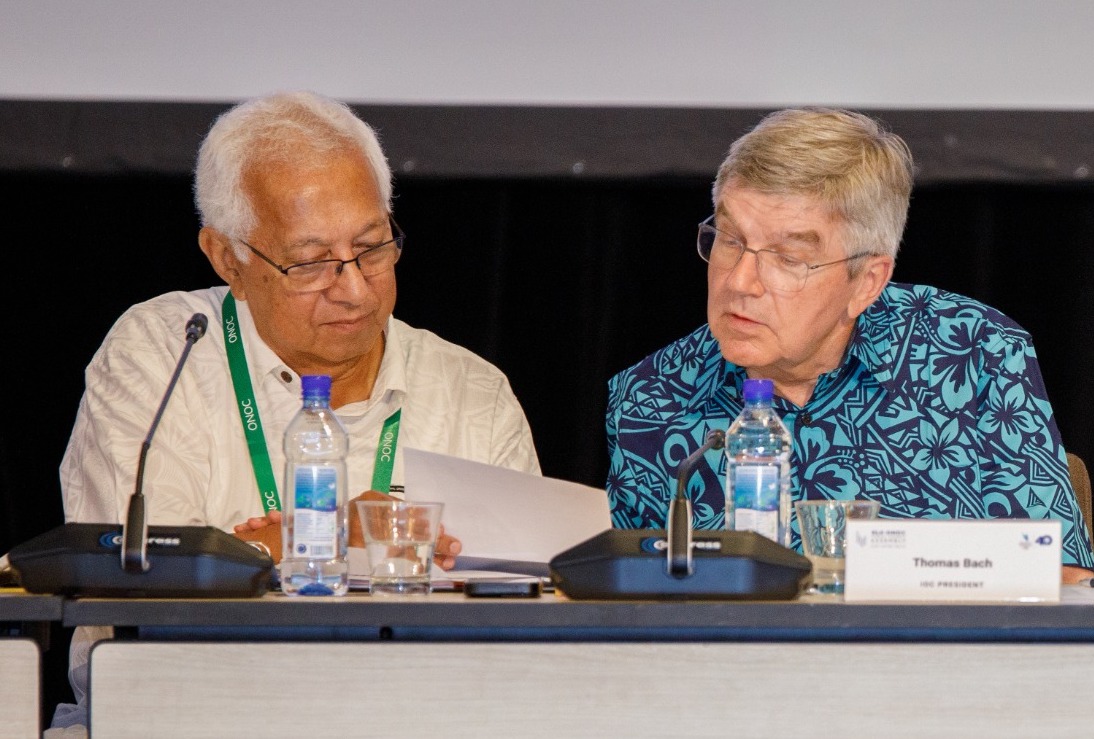 Robin Mitchell (ONOC President) and Thomas Bach (IOC President) at the opening proceedings of the ONOC XLII AGA in Nadi, Fiji. Mitchell carries the challenge of leading the Olympic Movement and developing sports from one of the most geographically isolated and vulnerable continents of the world. Oceania is almost 98% water, facing sea-level rise and a dying ocean, at the frontlines of climate change, and faces a host of natural hazards ranging from super cyclones and typhoons to volcanoes, drought, and saltwater inundation. | PHOTO: ONOC

The members of the Oceania National Olympic Committees (ONOC) were commended for their commitment to work toward joining the UN Sports for Climate Action Framework at their 42nd Annual General Assembly in Nadi, Fiji.

President of the International Olympic Committee (IOC), Thomas Bach said, ‘There are around 300 hundred sports organisations who are supporting this programme and sport can show its social influence, its social power, and can again be a leader in society.

‘We are doing this in solidarity because nobody can fight against climate change alone; whatever we do only makes sense if we are doing together, otherwise we will end up with nothing’.

President Bach acknowledged that the commitment from NOCs in Oceania was a show of support to the IOC effort in the sign up and actions toward the UN Sports for Climate Action Framework.

Only one NOC from Oceania, the Australian Olympic Committee, has signed up for the UN Sports for Climate Action Framework.

The IOC has championed the initiative through the sustainable design of its headquarters in Lausanne, Switzerland, and has made strategic moves toward the sustainability of future editions of the Olympic Games.

‘But in reality, they may already be climate positive in 2024 because Paris is making great effort in this respect’.

In Oceania, this new commitment for a collective approach to working toward joining the UN Sports for Climate Action Framework with support from the IOC Olympic Solidarity Programme is a huge boost toward other existing initiatives.

ONOC is currently working toward formalising its sixth Commission, the ONOC Sustainability Commission which is guided by specific intent to have NOCs map activities and projects that contribute to climate action and sustainability – specifically where they linked to the Nationally Determined Contributions (NDCs) of their individual countries.

This alignment is also being mapped out at regional Pacific level to determine alignment with, and contributions to the Blue Pacific 2050 Strategy, soon to be signed by Pacific Island leaders.

Perhaps the most unique element of this commitment by the NOCs is that none is expected to work alone – there is collective agreement to pursue this as a collective and with much sharing of ideas and learning exchange.

It was acknowledged that NOCs face financial and capacity constraints, and these factors will be addressed in the approach and way of working toward progressing and achieving this goal in the 2021 to 2024 quadrennium.

The first activity toward this commitment is scheduled for September 2022 – an online planning conversation.