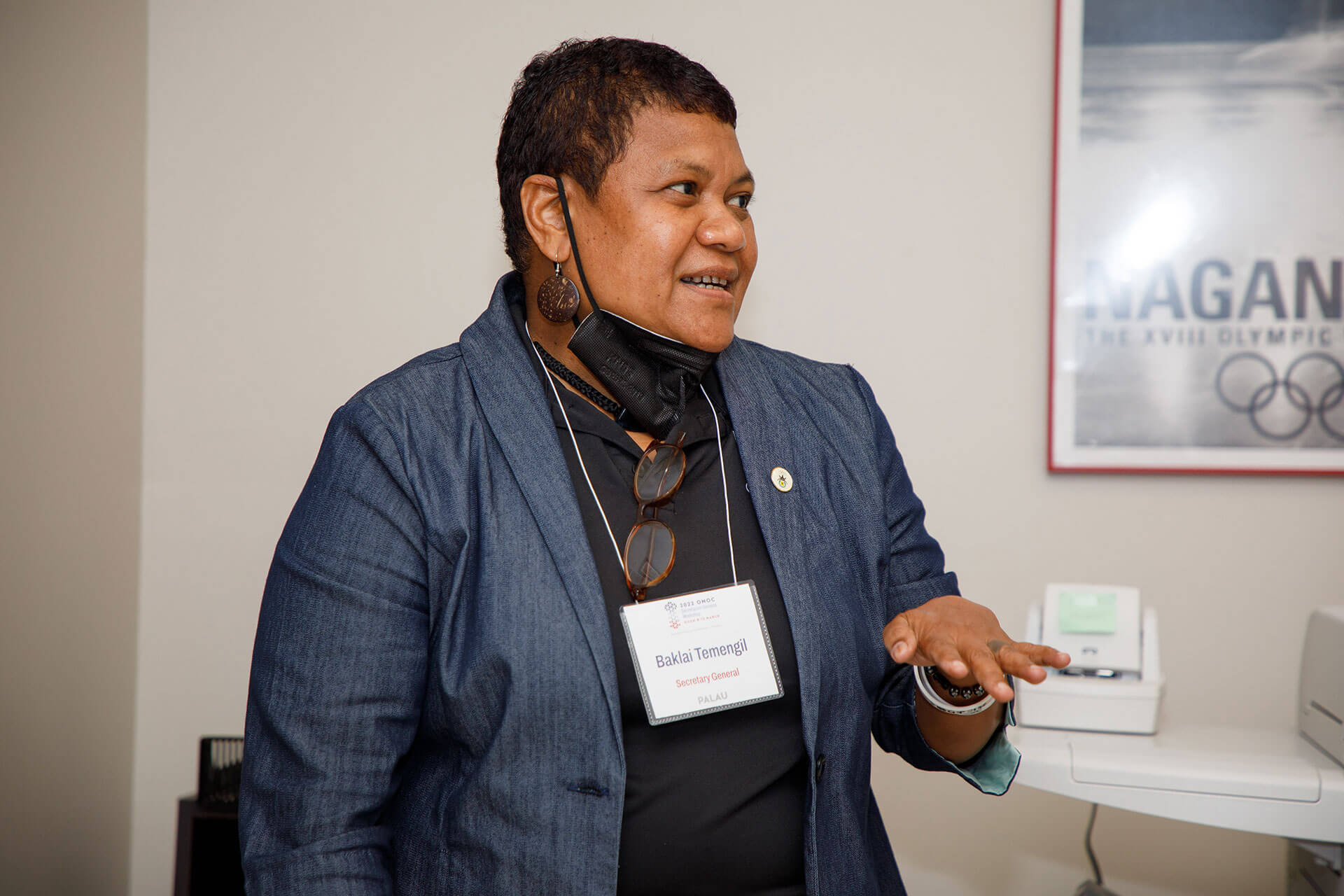 The Solomon Islands is better equipped to prepare its athletes for the upcoming SOL2023 PACIFIC GAMES with the appointment of twenty-four Sport Development Officers for a corresponding number of sports.

Speaking online from Palau in the launch and introduction of the twenty-four Sport Development Officers (SDOs) in Honiara, ONOC Vice-President Baklai Temengil-Chilton said, ‘The ONOC and the Pacific Games Council (PGC) partnership is important, as some of the sports on the 2023 Pacific Games programme will be used as Continental qualifiers for the 2024 Olympic Games in Paris.’

Vice-President Temengil said, ‘ONOC’s support to the Pacific Games has been through direct contributions to members and associate members, and includes, amongst other things, training, and development programmes for the Athlete Entourage through the flagship programme, the Oceania Sports Education Programme (OSEP).

‘During the Games, ONOC contributes technically through the Voices of the Athletes (VOA) programme, Medical Services and Poly Clinics, Communications and Media Outreach and also participates in both ministerial and side meetings organised to coincide with the Games.’

Temengil-Chilton said, ‘After recent discussions with the National Olympic Committee of the Solomon Islands (NOCSI), the National Hosting Authority and 24 Oceania Sports Federations (OSFs), it was decided that ONOC, through NOCSI, together with OSFO, would jointly deliver the Sports Development Officer (SDO) Programme, for sports that were interested in developing SDOs or enhancing an existing programme developed by the Oceania Sports Federations.

‘ONOC, as the initiator of the programme, would provide funding for it through the National Olympic Committee of the Solomon Islands.’

Vice-President Temengil-Chilton stated the possible outcomes for the programme would include international recognition for national coaches preparing their national squads for the Games and future international events; trained National Federation Technical Officials working with their Oceania Sports Federations during the Games reducing costs of bringing in overseas technical officials; and OSEP trained National Federation administrators (including Executive Committee members) and Team Solomon Islands Managers and Coaches serving the twenty-four sports on the programme.

The mode of delivery: links to OSEP and ONOC Commissions

Vice-President Temengil-Chilton said, ‘The respective SDOs will be responsible for liaising with OSEP to jointly coordinate and deliver programmes for their sport and this will include Sport Administration, Coaching courses, Strength and Conditioning, and Team Management courses.

The programme delivery and lessons from the past

Temengil-Chilton said, ‘Both the Oceania Sports Federations and their respective SDOs will be responsible for facilitating the selection and training of Technical Officials to gain the necessary qualifications to manage their sport during the Games.

‘This SDO Olympic Solidarity-funded joint-programme with Oceania Sports Federations has worked very well in the past for the Solomon Islands (up until 2000) with sports like Archery, Athletics, Basketball, Football, Tennis and Volleyball to name a few.’

Furthermore, Temengil-Chilton mentioned that , ‘Past experience has proven a strong legacy beyond the Games and for the Solomon Islands this would result in the: development of qualified Administration, Coaching and Technical Officials for the majority of sports in the Solomon Islands; development of the Team ‘Entourage’ to support and develop competitive Solomon Islands teams to ensure that the host does well in the Games; potential to bid for and host Oceania Competitions and ultimately international events in Honiara and the outlying islands in the group; and the expansion and strengthening of the delivery of OSEP courses in the Solomon Islands which will in turn provide stronger opportunities for all sports stakeholders.’

The SOL2023 PACIFIC GAMES will be held in Honiara, Solomon Islands at the end of 2023.