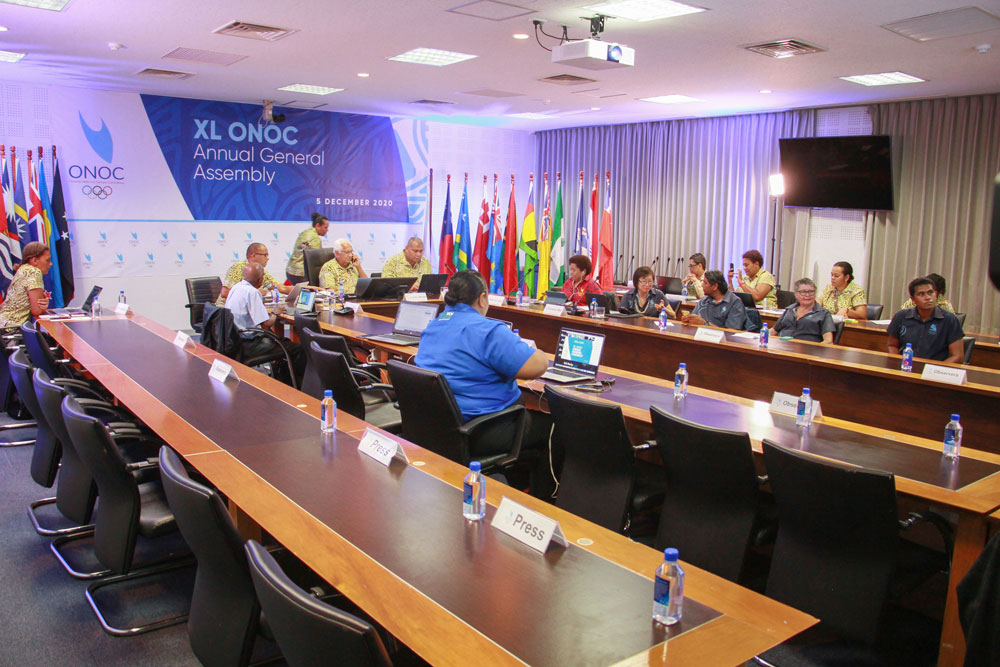 The Oceania National Olympic Committees (ONOC) have been commended for the demonstration of hope in sport through continued delivery of sporting programmes in Oceania during the current COVID-19 pandemic.

IOC President Thomas Bach made special mention of the Cook Islands for holding its National Games, and commended ONOC President Dr Robin Mitchell for his exemplary leadership of the Olympic Movement’s smallest region, and as Chair of Olympic Solidarity Commission, for his hard work in helping secure continued sponsorship from the Olympic partners programme, enabling the Olympic Solidarity funding programme to increase support to IOC’s 206 National Olympic Committees (NOCs) and 5 Continental Associations.

In a similar vein, the head of the Olympic Solidarity programme Mr James McLeod, commended ONOC for being a region that despite difficulties of distance and capacity, was now almost reaching the completion of all 17 NOCs achieving finance audits according to the new minimum management standards at IOC.

The ONOC held their XL Annual General Assembly online on 5 Dec. 2020. After a history of 39 annual assemblies in person, this was the first virtual annual assembly of its 17 Members, 7 Associate Members and various Partners. It was jointly coordinated by the ONOC Headquarters in Fiji and the Office of the ONOC Secretary General in Guam.

“We were prepared for an Assembly in Guam in April this year so we circulated the minutes in due time for that meeting. When COVID-19 struck, most of us were not sure what was going to happen because of all the threat it imposed,” ONOC President Doctor Robin Mitchell said in his opening remarks to the delegates.

Key highlights for ONOC Members in light of the social and economic impact of the COVID-19 pandemic to small island economies were the Olympic Solidarity Programme’s reiteration of increased funding to NOCs and Continental Associations announced several weeks earlier, the redesign of the programme ensuring smaller NOCs could receive increased funding, flexibility in NOC projects and programmes conducive to local realities for better results and deeper impact, easier reporting, and the targeting of gaps to build NOC capacity through specific funding for the recruitment of finance and education officers, the former to ensure NOCs can meet IOC minimum management standards.

The Assembly also received comprehensive updates from the ONOC Athletes’ and Equity Commission and on preparations toward Tokyo 2020 (Tokyo 2021) from Mr John Coates, Chair of the Coordination Commission. The Assembly heard of the Qualifications Systems, the evolving Playbook built through processing every possible scenario per sport, and the robust and evolving COVID-19 Countermeasures involving travel, physical distancing and the IOC working in close collaboration with the World Health Organisation (WHO) and its development of a vaccine with the global scientific community, which if available, would not make vaccination mandatory for athletes. Aside from their own deliberations and decisions, the two updates from the Olympic Solidarity and Tokyo 2020/21 were key highlights for ONOC members attending the Assembly.

In his final reflections ONOC Secretary General Rick Blas affirmed the delegates by  saying, “the New Year brings hope for the future of sports and the Olympic Movement and I want to thank all of you for the support you have given the ONOC Secretariat.”

About the ONOC General Assembly

The Assembly heard of the Qualifications Systems, the evolving Playbook built through processing every possible scenario per sport, and the robust and evolving COVID-19 Countermeasures involving travel, physical distancing and the IOC working in close collaboration with the World Health Organisation (WHO) and the development of a vaccine by the global scientific community.

The XL AGA was preceded by 3 days of Pre-Assembly Workshops whereby delegates approved for adoption at today’s (5 Dec.) Assembly, the findings of a research on the relationship between NOCs and ministries of sport and a plan to improve this; the evaluation report and new strategy of the ONOC’s Oceania Sport Education Programme (OSEP), the creation of a Communications network comprising focal points from NOCs and the ONOC communications department, its audited financial report and financial statements and the new ONOC Plan 2021 – 2024.

More on the ONOC General Assembly can be found here