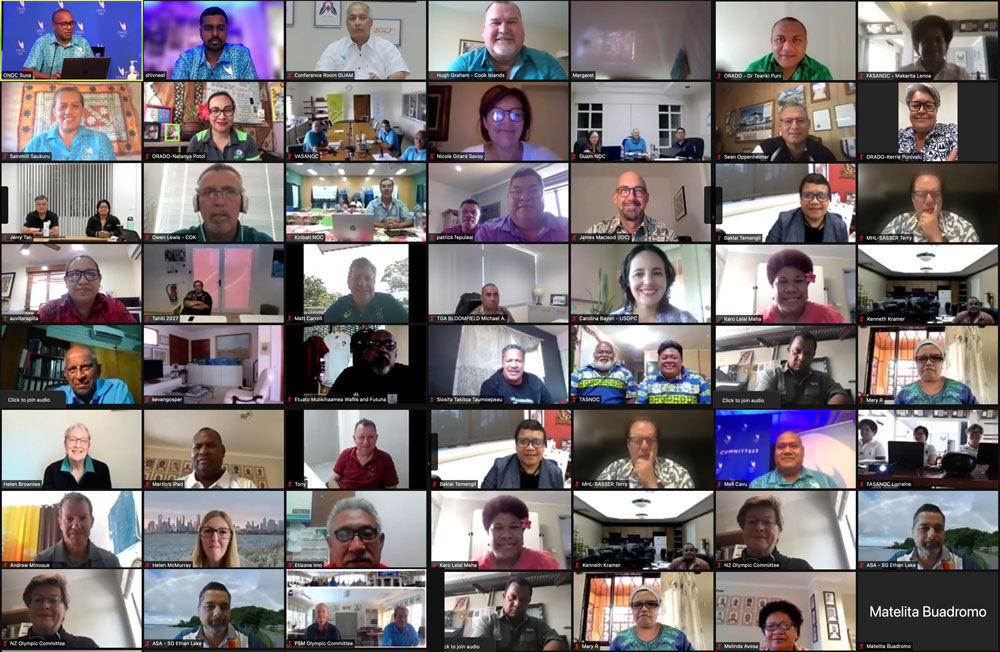 The Oceania National Olympic Committees (ONOC) in its livestreamed 41st Annual General Assembly (AGA), noted the success of the Tokyo 2020 Olympic Games and presented a lineup of regional and global sporting competitions that athletes of Oceania could look forward to. It also shared a suite of support available to the region as countries continue to recognise the importance of sport in health, social and economic development, particularly in ongoing COVID-19 pandemic realities.

ONOC President Robin Mitchell thanked all National Olympic Committees (NOCs) for participating in the XXXII Olympiad, congratulating Australia and New Zealand for their finest performances ever, and for finishing sixth and 13th overall respectively.

Dr Mitchell also congratulated Tonga for three athletes finishing in the Top 8 of their sports, earning Olympic Diplomas, and five other Pacific island countries that set new National Records. Acknowledgement was also extended to Fiji for the fine performances of its Women’s and Men’s Sevens Rugby teams ending with podium finishes - bronze and gold medals respectively.

Mitchell also thanked John Coates, International Olympic Committee (IOC) Vice-President and Chair of the Coordination Commission for the Tokyo Olympics, for successfully delivering the world’s first postponed Games and for ensuring safety under the COVID-19 pandemic.

In addition, Mitchell congratulated the Australian Olympic Committee (AOC), the city of Brisbane, and the state of Queensland for winning the bid to host the Brisbane 2032 Olympic Games which brings the Olympics to Oceania.

In recognition of ONOC’s 40th Anniversary this year, Mitchell also presented a summary chronology of highlights to the Assembly and said, “we will be celebrating our 40th anniversary when we meet face to face next year and we also have a book coming out then.”

As a note to Members, Mitchell reminded the NOCs that both ONOC and the Association of National Olympic Committees (ANOC) have annual grants for Athletes’ Commissions in countries.

President Mitchell also pointed to a very busy road to the Paris 2024 Olympic Games as there were several key competitions in the lead up including  the CommonwealthGames, Pacific Mini Games in Northern Marianas (Saipan 2022) and the Pacific Games (Honiara 2023) aside from invitations from the suite of competitions under the Olympic Council of Asia (OCA).

New commission on Sustainability progressing to formalisation in 2022

Baklai Temengil-Chilton, the Vice-President of ONOC provided a key highlight as Chair of the Working Group on the development and establishment of an ONOC Sustainability Commission to champion the use of sport and athletes toward climate change and environmental concerns in the Pacific region.

Temengil-Chilton said the concept of environmental advocacy and practice now linked to climate change concerns in the region was not new to ONOC or sports as athletes have engaged in these for several decades.

However, the progress toward the formalisation of a new commission on Sustainability will harness the visibility and leverage of the Olympic Movement and athletes in advocacy and messaging at national, regional and global levels more strategically in the next four years.

The four women hand-picked by Dr Robin Mitchell to head this initiative are already members of the IOC Sustainability Commission. Aside from Temengil-Chilton of Palau, the others are Auvita Rapilla of Papua New Guinea, Sarah Walker of New Zealand, and Makarita Lenoa of Fiji.

The Sustainability Commission will be formalised at the next ONOC General Assembly scheduled to be held in Auckland, New Zealand in May 2022.

Chair of the ONOC Equity Commission Helen Brownlee shared that the Tokyo 2020 Games achieved 48.8% gender parity, the highest to date.

Brownlee added that while there remained variances in gender balance based on sport, the IOC Women in Sport Commission was “working hard to change this and there are changes that are coming”.

Brownlee stated that while gender parity had improved for athlete representation, flag bearer representation at opening and closing parades, and in the case of ONOC, for chefs-de-mission, much work remained at management and governance levels at NOC level.

Call for NOCs to embrace digitalisation to increase athletes voices

Lelai said, “Our athletes are affected by the ongoing COVID-19 pandemic and their training and capacity building opportunities have gone online over the last two years.”

“They need to be able to access all webinars and learning opportunities online.”

Lelai also highlighted, “We now have a new Athletes’ Commission microsite which has information on all our activities and we will be using it to share opportunities and news.

“It’s important to improve digital access to athletes and athlete leaders so that they may be connected and use every opportunity available to them.”

Secretary-General Ricardo Blas acknowledges the departed and delegations in transit

As part of the formalities at the Opening of the General Assembly, Secretary-General Ricardo Blas paid tribute to sporting leaders and colleagues who had departed.

Blas made special mention of the Tongan and Cook Island delegation members who were in New Zealand still enroute to their home countries given COVID-19 restrictions and protocols. There was also acknowledgement for the Kiribati weightlifters stranded in Nauru due to the pandemic, going into the second year now.

In a message to the ONOC General Assembly, IOC President Thomas Bach acknowledged Oceania for their contribution to the success of the Tokyo 2020 Olympic Games.

Bach said, “It was particularly challenging in Oceania where you were facing border closures and limited flights ahead of Tokyo.”

“It took an unprecedented effort from all of us to make them happen in a safe way.”

Bach also reiterated the importance of sport to society and thanked Oceania NOCs for promoting the values of Olympism in all their activities.

The Olympic Solidarity Programme presented from IOC headquarters in Lausanne, sharing the success of Oceania athletes under the Olympic scholarship.

James MacLeod, head of Olympic Solidarity said three Olympic diplomas were won by Olympic scholarship recipients and a silver medal was won by an Oceania athlete who was beneficiary of the programme.

MacLeod also shared that from Oceania athletes under the scholarship programme, 27 percent men and 49 percent women qualified for the Tokyo 2020 Olympic Games.

He also shared that the Olympic Scholarships were open for applications and the new programme begins with a cohort in January 2022.

Given the United Nations recognition of sport as a critical part of COVID-19 national economic recoveries and its role in health, social and economic development, ONOC is working toward a stronger four years in the Oceania Continent.

Watch the replay of the XLI ONOC AGA