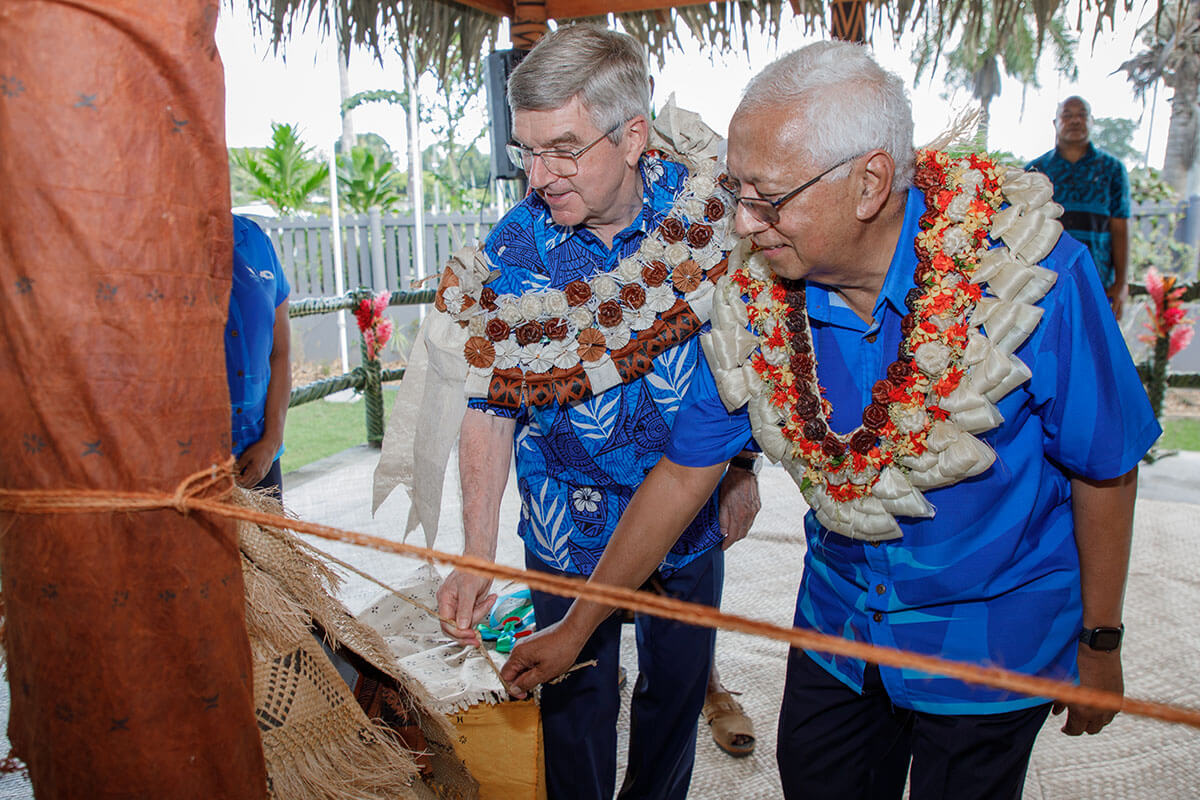 The Olympic spirit is fully alive in Oceania all the time, and the Oceania National Olympic Committees (ONOC) and its members take a holistic look at what it means to be a member of the Olympic Movement.

These were the sentiments of IOC President Thomas Bach at the opening of ONOC House, the Oceania Continent home belonging to all its member National Olympic Committees (NOCs).

Congratulating the ONOC President Robin Mitchell, Secretary-General Ricardo Blas and ONOC leadership and members, President Bach said, ‘Our Olympic Values of excellence, respect and friendship fulfil our mission to make the world a better place and you’re not just talking about our values or praising our values – you are living these values.

‘You have been living these values for a very long time and you have a clear strategy and determination to live this into the future.’

President Bach also congratulated ONOC President Mitchell and the leadership team for the ‘great achievement of finally having a permanent home after 41 years’, reminding all that ‘this home is for all the national Olympic Committees of Oceania and for the entire Olympic Movement in the region’.

Linking to the IOC’s recent 2019 experience of building and moving into its new headquarters in Lausanne, President Bach said, ‘This home will be a great inspiration for everybody because from a home you can plan a better and even brighter future for ONOC, for athletes, and for National Olympic Committees in the region.

‘You will be inspired by this togetherness to work toward excellence in all spheres of your activities, inspired into an outlook ten years from now when you will have the Olympic Games back in Oceania through BRISBANE 2032’.

President Bach said, ‘It’s great to have the Olympic games back in your region but all this does not make the Games and the Olympic Movement special – what makes them special are the Olympic Values.

‘It is our mission to make the world a better place.’

ABOUT ONOC HOUSE AND THE TRADITIONAL ELEMENTS OF THE CEREMONY

ONOC House is in Suva, Fiji. It sits on Gladstone Road overlooking several iconic sites in the Fijian capital: Albert Park, Government Buildings, the Grand Pacific Hotel, and on its left, Thurston Gardens and the Fiji Museum – all remnants of its British colonial past.

The whale’s tooth is the highest ceremonial artefact that is used by indigenous Fijians to mark key life events and celebrations. It is used to mark births, deaths, and marriages. In ancient days, the whale’s tooth had the power to both cause and avert wars, and in periods of war, the power to shift allegiances of warring parties.

The opening ceremony was attended by a wide cross-section of Fiji’s sporting, government, diplomatic, corporate, and private sector communities. In the traditional Fijian protocol, key was the attendance of Ratu Kinitavaki Solomone, the Tui Suva, head of the customary landowners of the peninsula of Suva. Furthermore, the property of which ONOC House sits and the surrounds of Albert Park, Thurston Gardens and the Fiji Museum are the expanded site of the ancient village of Suva and its bathing pools, gardens, and groves.

As part of adherence to traditional protocol, the Tui Suva, who now resides across the bay of Suva was approached and traditionally informed and invited in the Vaka Viti (Fijian) way before the Western gesture of the formal invitation card was sent. In all matters of ritual and ceremony, a Fijian chief or head of clan represents his or her people, its traditional lands, seas, and all living creatures within its ecosystem, hence the gravity lent to ritual and ceremony.

After formalities, IOC President Bach and guests took group visits of ONOC House. Part of the featured stops included the showcasing of traditional coconut fibre lashings known as lalawa, completed by a group from the Lau Group in eastern Fiji. There were also a beginning set of micro-galleries within the office featuring inaugural Olympic Games medallists, historical ONOC events collages, annual general assemblies, and Oceania winners of the IOC Women and Sport Awards.