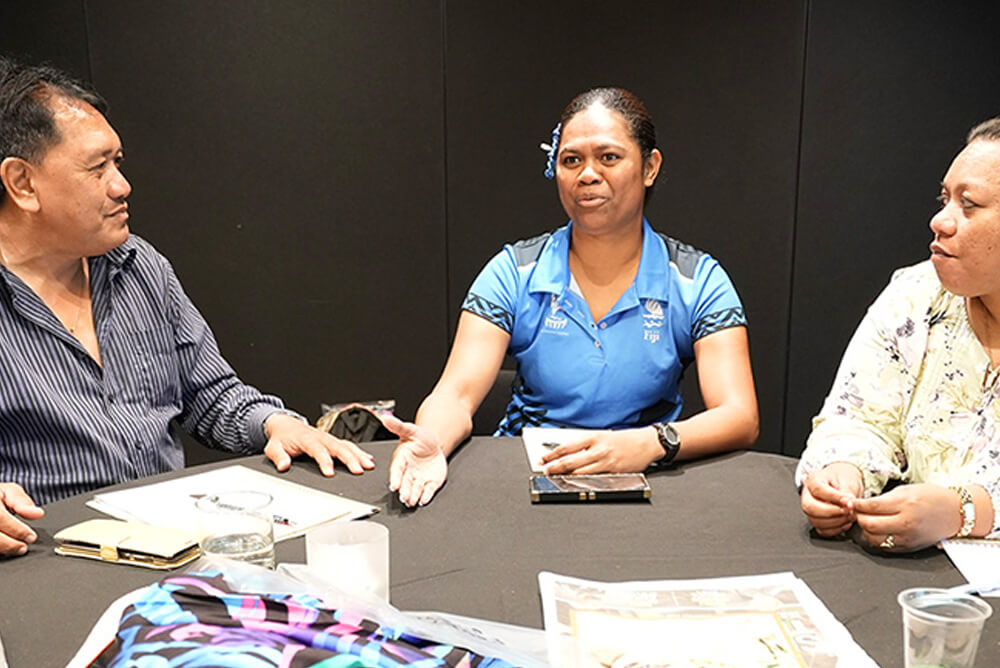 Three gender equality in sport ambassadors in Oceania were inspired and challenged positively at the ONOC Gender in sport Master Class held a day prior to the 8th IWG Women and Sport Conference in Auckland, New Zealand.

Support systems and male allies important for women in sport

The essence of leadership is ensuring there are support systems in place to ensure women in sport thrive in all aspects of life.

Matelita Vuakoso (FIJ), learned at the Master Class that ‘support systems are important and need to be in place for women in sport to thrive.

‘It is also important to value male allies.’

Vuakoso learned from peers in other countries that ‘the challenges we are facing now in our region are similar challenges that we are going to face in future unless we take it on and prioritise depending on needs and contexts.’

This is Vuakoso’s second Master Class as she completed the first edition in 2019 after having been selected from three sub-regional groupings after an initial workshop series covering the entire Pacific region in 2018.

Vuakoso shared two things that were valuable from the first Master Class which helped in implementation and practice including having inspirational role models from the ONOC Equity Commission leaders, ‘It helped drive me to see that whatever work I was involved in within sport, I could use as a platform to create change.’

The second was in acknowledging that change happens over time but that it was the little steps taken that matter and ultimately made a difference.

Vuakoso said following the Master Class, ‘I hope to continue to drive positive change and to build and support what is being done in the gender equity space – and to continue advocating for, and being a champion for, women and girls in sport.

‘I wish to assist and support the Fiji Association of Sport and National Olympic Committee (FASANOC) to re-energise and act on women in sport activities in Fiji.’

Milton Kisapai of Papua New Guinea (PNG) said, ‘This and previous master classes provided good insight and understanding into the challenges of women – it is good that all the master classes have been inclusive of men because we come from very strong patriarchal societies and it is important to have male advocates for women in sport.

‘In sports there is progress in equal participation of women but then how do we translate that into society?’

Kisapai shared, ‘We like sports is great as an avenue for women’s participation and progress – sport has done well over the years but there is much more to do.’

Kisapai said, ‘I’m from the Papua New Guinea Olympic Committee which has done so well in progressing women empowerment at the executive board level, however, that needs to now be translated to fit into the national federations.

‘There are sports that have both genders participating and what needs to be more effective is that more changes need to happen to ensure that the national federations – especially to have gender balance at executive levels and from there it will trickle down to the member positions.

Milton Kisapai shared two points of discomfort encountered personally as gender equality ambassador for women in sport in Papua New Guinea, emphasising, ‘it is very important to have uncomfortable conversations.’

Kisapai shared that even as a male ally, ‘I am very careful in my role as a male ally in the women in sport space because I advocate for women but women may say I am a man and do not understand their situation or question my speaking on their behalf.

‘I am very self-reflective and am careful to not speak from women’s standpoint because only they can do that but I can support their voice.

‘In my experience, and going back now, my challenge is to be a good male ally – as allyship is when there is no woman in the room and my role is to support women when they are absent in a space – and I have been reflecting a lot on this – how can I be comfortable having these uncomfortable discussions with men?’

Kisapai said the one key inspiration is coming from a family of women and using that as guidance in working as a male ally in women in sport in Papua New Guinea.

Master class participant and gender equity ambassador from the Cook Islands, William Taripo said, ‘I have learned so much from the master class and from the IWG World Conference as well about women in sport and their need to be recognised in higher positions in different levels of sport – there is a lot of encouragement for women in sport and many women shared what they do not have.

‘It is one of the things that I was trying to do back at home [Cook Islands] – I come from rugby and I’m on the [executive] board for rugby – we need to change our policy and our constitution - we have already begun with draft versions of our constitution and the only item left is endorsement so we will be doing that.

Taripo said, ‘Another thing I have learned is that if you form a board you don’t have to have all of them as rugby players – you can decide that half of them will be female, and board members can come from backgrounds such as marketing, knowledge in writing proposals for funding, and legal so that you can write constitutions and policies.

‘In rugby we rely on the IRB and they give funding on an audit based on population, number of clubs we have, activities being run, and now there is expectation for more female coaches so that’s the way I look at it – gender balance is important.

‘I expect a lot of questions when I get back home – it’s a woman conference – so I will have to explain gender equality and gender balance, and sometimes that is difficult to explain, sometimes it is our culture that makes it difficult to change things.’

‘I will have to see what I have learned from this.’

The ONOC support toward gender equity in this event covers the Master Class participants, and ONOC Equity Commission executives and NOC delegates attending the IWG Conference.

For more information and research purposes, please visit the following links for more: