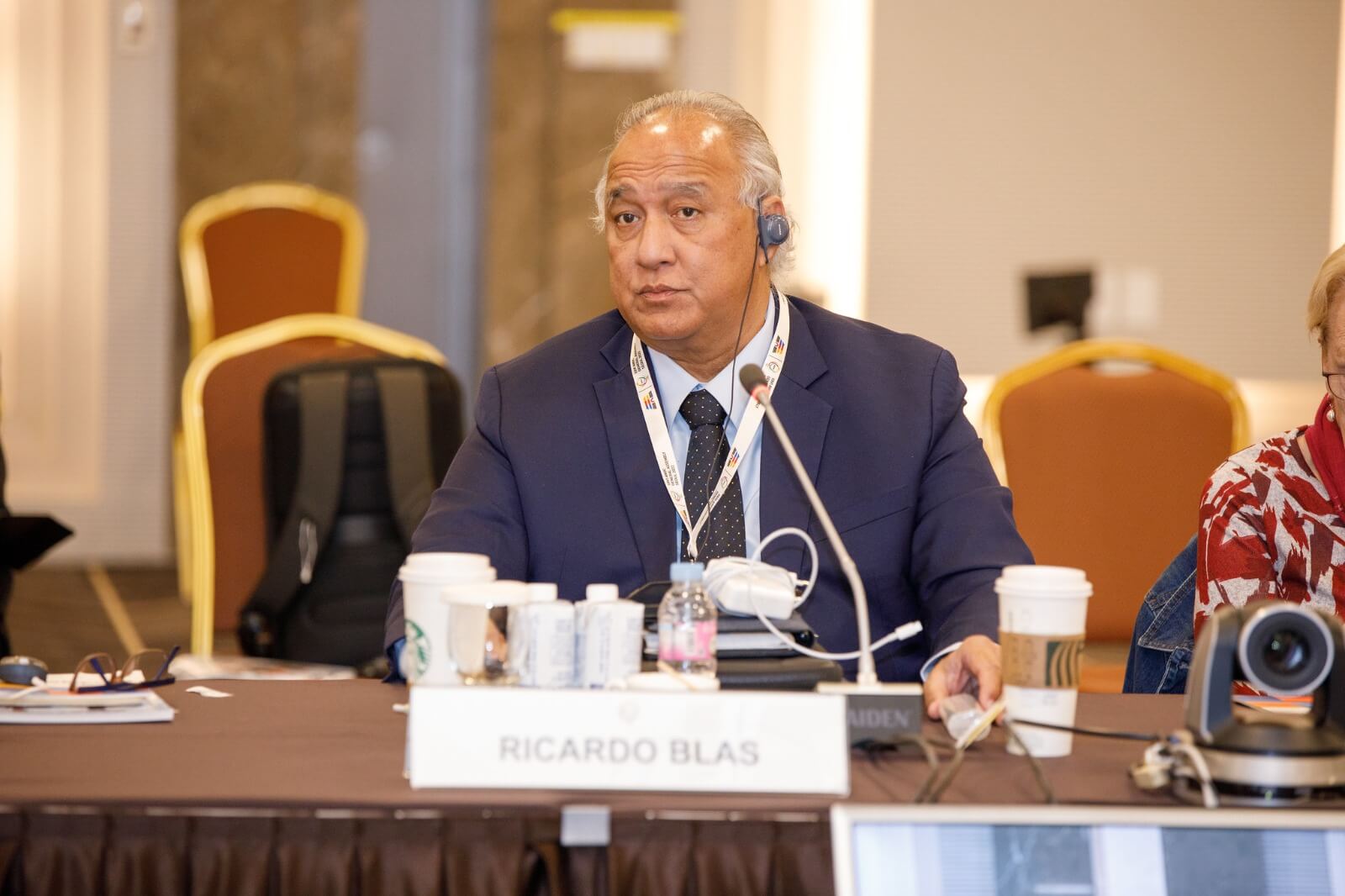 There are numerous reasons to celebrate life and sport, and more so for ONOC and its members, delivering sports in one of the world’s most challenging geographical spaces.

This was evident in ONOC Secretary-General Ricardo Blas’s Continental Report to the Association of National Olympic Committees (ANOC) in Seoul, Korea, this week.

Learning to live, work and play in a pandemic

Secretary-General Blas said, ‘ONOC has just turned 40 years old, and this has been, among other things, a reflective year for us as a Continental Association - we have learned many lessons and continue to do so, especially, during the pandemic we are all learning to live, work, and play in.’

Blas shared that to bring operations at Continental level to a manageable order, ONOC followed suit with the IOC’s Olympic Agenda 2020+5 by extending its Strategic Plan 2018 – 2021 by another year, and now embarking on a new planning process for its Strategic Plan 2023 – 2025.

The core mandate of promoting Olympism and the Olympic Values

Blas said, ‘Our core mandate is to promote Olympism and the Olympic Values in Oceania – at its heart sits the Olympic Solidarity Programme and as we do annually, we provided the National Activities Programme or NAP; and various grants addressing human resources, sports equipment, national games, and regional games.

‘The year began with a Secretaries-General Workshop in Guam which marked the formal start of the Olympic Solidarity Programme in Oceania – we released an Outcomes Statement that was further endorsed and adopted at the ONOC Annual General Assembly in May this year.

‘ONOC held its Olympic Solidarity Forum was a day prior to the ONOC XLII AGA and a few key outcomes include all NOCs agreeing to work toward adopting the Sport for Climate Action Framework, agreement to begin using the scholarship to train people under the IOC Athlete Safeguarding Course, and agreement for support toward filling out administrative and programmatic forms on RELAY through extra training sessions with both ONOC and Olympic Solidarity in Lausanne.

‘ONOC also held its 42nd Annual General Assembly in May this year – an event which held prime significance with the hosting of IOC President Thomas Bach who also opened ONOC House – the Continental Association’s new headquarters in Suva – a home for all 17 NOC Members.

‘This was followed by the ONOC 40th Anniversary Dinner which featured a Pacific-style talanoa or storytelling by ONOC senior leaders.

ONOC is using the 40th anniversary for ongoing projects in publication and digital legacy building to signpost the upcoming 50th anniversary in 9 years’ time.

New members elected to the ONOC Executive Board

In recognition of outstanding contributions to sport in Oceania, Blas said, ‘ONOC Merit Awards were presented by IOC President Thomas Bach to Sainimili Saukuru, former ONOC OSEP Coordinator for leading the building of an outstanding community-based sport education programme, and to Chet Gray, Secretary-General of the Organisation of Sports Federations in Oceania (OSFO) which he helped build and manage to date.’

Under the flagship Oceania Sport Education Programme, Blas said, ‘ONOC signed a 4-year MOU with the Pacific Community’s educational quality and assessment division to accredit 14 courses into micro-qualifications for recognition in the Pacific Islands region and the partnership has completed six micro-qualifications which cover governance, financial management, strength and conditioning coaching, and sports management.

‘OSEP has also completed the bulk of its refresher courses to re-license its trainers in the Oceania region and is going to launch two digital platforms – the OSEP Website and the OSEP Learning Management System converting its courses onto an online system to complement the face-to-face trainings.’

Blas added, ‘ONOC also improved NOC digital communications by procuring and distributing Conferencing Kits to all NOCs which is key to ensuring technological parity between NOCs and to ensure no NOC or NOC Commission is unable to connect for meetings and workshops or seminars – it also ensures NOC Athletes’ Commissions can access Athlete 365 courses and opportunities from the NOC offices.

‘In the same vein, under the NOC Websites Project, ONOC has provided support to 8 NOCs – these are Fiji, Guam, Solomon Islands, Tonga, Kiribati, Tuvalu, Vanuatu, and Palau; and delivered websites for the ONOC Athletes’ Commission, the flagship OSEP programme, and the Micronesian Games – the latter two to be launched soon.

‘These have been prioritised as key to NOC and athletes’ visibility and promotion of Olympism and Olympic Values from Oceania – and also in alignment with the clarion call for digitalisation in our shared IOC Agenda 2020+5 Roadmap.’

Shared progressive success with our Partners

Secretary-General Blas said, ‘ONOC continued to work with and support Partners for the benefit of athletes and entourage development in Oceania, for example, work with the Oceania Australia Foundation (OAF) has to date seen 51 scholarships awarded to 27 male and 24 female recipients.

‘ONOC has also supported the Oceania Regional Anti-Doping Organisation (ORADO) which conducts doping control education, training and critical In-Games and Out-Of-Games testing in the region and with the Organisation of Sporting Federations of Oceania (OSFO), providing a Continental-level support mechanism for various sports to enable a regional approach to technical assistance in sports.

‘With the Pacific Islands News Association (PINA) at its biennial Pacific Media Summit ONOC has now secured support from the Sports Journalists Associations of five countries to engage in a Media Component under Shared Services Programme for the PARIS 2024 Olympics and more ore sports journalists association are expected to enter this arrangement as they are registered in the next two years.

‘In partnership with the University of the South Pacific (USP) the regional university comprising 12 Member Countries continues, of the Pacific Research Graduate Scholarships in Sport enable students in the Master’s Programme to pursue sports-related research themes in sports.

‘These have been undertaken in the areas of economics, sociology, and politics & international affairs.

‘The partnership with USP also features the Oceania Sports Information Centre (OSIC) whose central role is to collate and share a results management system from our Continental Games, the Pacific Games. ONOC’s Communication Department is now working to provide support to OSIC toward this end.’

ONOC through its International Relations Commission signed a Partnership Agreement with USP to deliver IRC activities under the Pacific SPAPE Action Plan.

Blas also shared high-level activities ONOC conducted in support of athletes, first of it being the 5th Oceania Athletes’ Forum.

Furthermore, Blas shared that, ‘The Voices of the Athletes’ or VOA Programme and Olympic Day 2022 were activated at the NORTHERN MARIANAS PACIFIC MINI GAMES in Saipan and Rota this year where athletes led VOA activations for athletes – and on Olympic Day, celebrations were held in the middle of the Games itself – enabling a multi-country observation for the first time.’

Secretary-General Blas said, ‘ONOC conducted the NORTHERN MARIANAS PACIFIC MINI GAMES 2022 Diagnostics and followed up with Games support and OSEP also engaged in the Games with an Entourage survey and resulting report showcasing the impact of its programme to entourage development.

‘For the BIRMINGHAM 2022 COMMONWEALTH GAMES, ONOC activated its long-standing partnership with The Reporters’ Academy to provide full media coverage of the small Pacific Islands Countries and the two-week engagement brought maximum coverage to every athlete from the Pacific Islands, something quite rare at most Games.

‘ONOC also launched its SOL2023 PACIFIC GAMES Sport Development Officers Programme (SDOs) last month - the programme is to enable various National federations in the Solomon Islands to deliver competitions at Games Time next year – an initiative which we hope leads to the decrease in reliance on external technical support progressively.

‘In addition, the ONOC BRISBANE 2032 PROGRAMME was announced by President Robin Mitchell, our ONOC 10-Year Roadmap to getting small Pacific Islands for long-term athlete and entourage development toward improving performance - the announcement was made on 23 July – exactly 10 years to the day of opening of the BRISBANE Summer Olympics in 2032.’