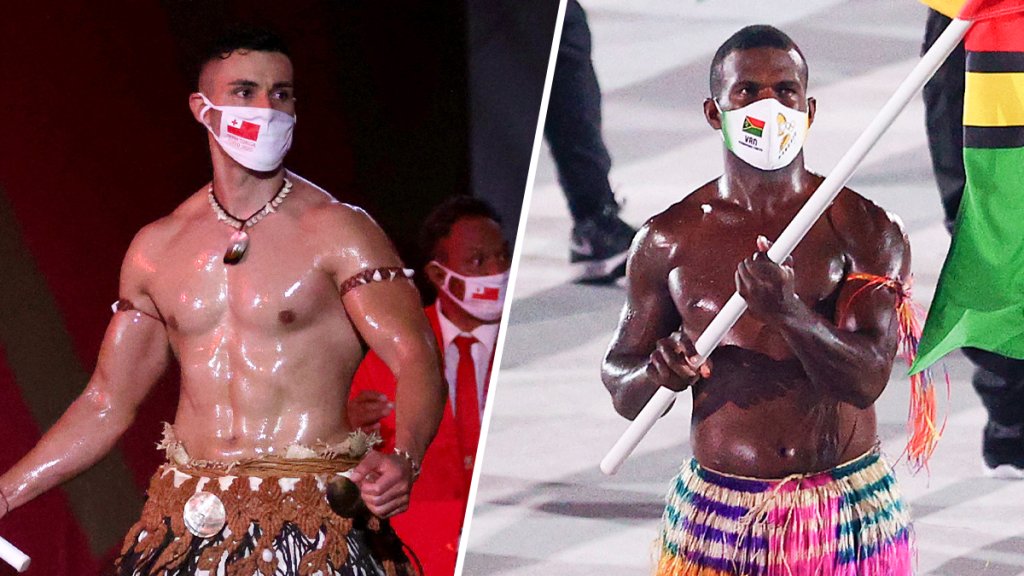 Two Pacific flag bearers in their traditional attire and well-oiled bodies sent Twitter fans into a frenzy at the opening of the 32nd Olympics in Tokyo Friday night.

TOKYO, 24 JULY 2021 (PACNEWS) --- Two Pacific flag bearers in their traditional attire and well-oiled bodies sent twitter fans into frenzy at the opening of the 32nd Olympics in Tokyo Friday night.

Not only Twitter fans but the international media featured the two Pacific athletes in their coverage of the opening ceremonies.

Tonga’s Pita Taufatofua, dubbed the ‘shirtless’ flag bearer once again became an internet sensation – three times in a row - carrying his island kingdom’s flag at the 2016 Olympics in Rio de Janeiro, and
the 2018 Winter Olympics in South Korea.

‘Maybe it’s a time for everyone in the world to listen to what us native and cultural people have had to offer.’

He also competed in taekwondo in 2016 before qualifying for the 2018 Winter Games in cross-country skiing.

He was carrying the flag alongside Malia Paseka, who will also be competing in taekwondo.

Here are some comments trending on Twitter immediately after Tonga’s march past at the opening ceremony.

'Tonga's oily flag bearer is one of the greatest Olympics stories ever!’

‘Once again the Tongan flag bearer did not disappoint.’

‘A lot has changed in the world since then, but thankfully some things – including Taufatofua’s shiny 6-pack – remain the same. Tonga’s well-oiled sports machine is back on the Olympics stage – and viewers are loving it!’

Not to be outdone, Vanuatu’s flag bearer, Riilio Rii gave Tonga’s Taufatofua a run for his money.

FOX News described Rii as the ‘the new heartthrob’ at the forefront of the Olympics opening ceremonies on Friday.

‘While fans watching the Games were going gaga over Tonga’s Pita Taufatofua, Rii carried the flag shirtless in Tokyo and appeared to be just as buff and chiselled as the Tongan taekwondo star,’ said American Fox News.

‘Vanuatu has its own shirtless and oiled up flag bearer!’

‘The Vanuatu flag bearer and shirtless too!’

Tonga's Pita Taufatofua and Rillio Rii, a rower from Vanuatu, both went shirtless while serving as flag bearers during the Tokyo Olympics opening ceremony.

Rii who competes in the Men’s single 2000m single scull rowing event, came third in the repechage race today (Saturday 24 July) pushing him to a final race to determine final bottom rankings for the Olympics.

The 27-year-old is a veteran rower with ten years of experience.

PACNEWS
PACNEWS coverage of the Tokyo 2020 Olympic Games is made possible with travel support through a long-standing partnership between PINA and the Oceania National Olympic Committees (ONOC).