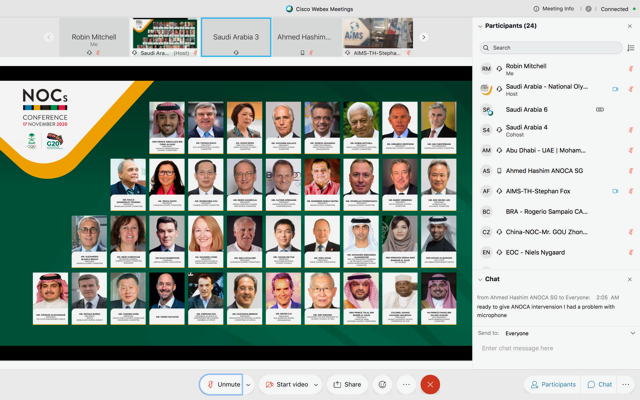 Sport plays a central part in the process of governments and countries reopening their societies and economies at various stages of the COVID-19 pandemic.

Sport plays a central part in the process of governments and countries reopening their societies and economies at various stages of the COVID-19 pandemic.

Speaking at the opening of the first-ever virtual G20 National Olympic Committees’ Meeting on 17 November 2020, Dr Mitchell drew attention to the fact that sport promotes healthy lifestyles and contributes to economic recovery.

“In this regard, National Olympic Committees have a unique opportunity to lead on a critical part of the national dialogue going forward and bring the values of sport to the front of the debate. In doing so they will contribute to the promotion of the UN sustainable development goals in the most effective way,” he said.

Dr Mitchell also drew attention to the promotion of gender, social inclusion, good governance and safe sport by the IOC and ANOC respectively. These not only act as non-negotiable parts of NOCs’ basic minimum requirements for operations, but are critical for ensuring responsible and sustained development of the 206 NOCs in the Olympic Movement.

“The COVID-19 pandemic has added a new dimension to NOCs’ responsibilities which cannot be ignored and, indeed, should be embraced,” he said.

The G20 NOCs’ Meeting was held online under the instigation and drive of the Saudi Arabia National Olympic Committee headed by His Royal Highness, Prince Abdulaziz Bin Turki Al-Faisal Al-Saud.

Click on the link below for more information about the G20 NOCs’ Conference: