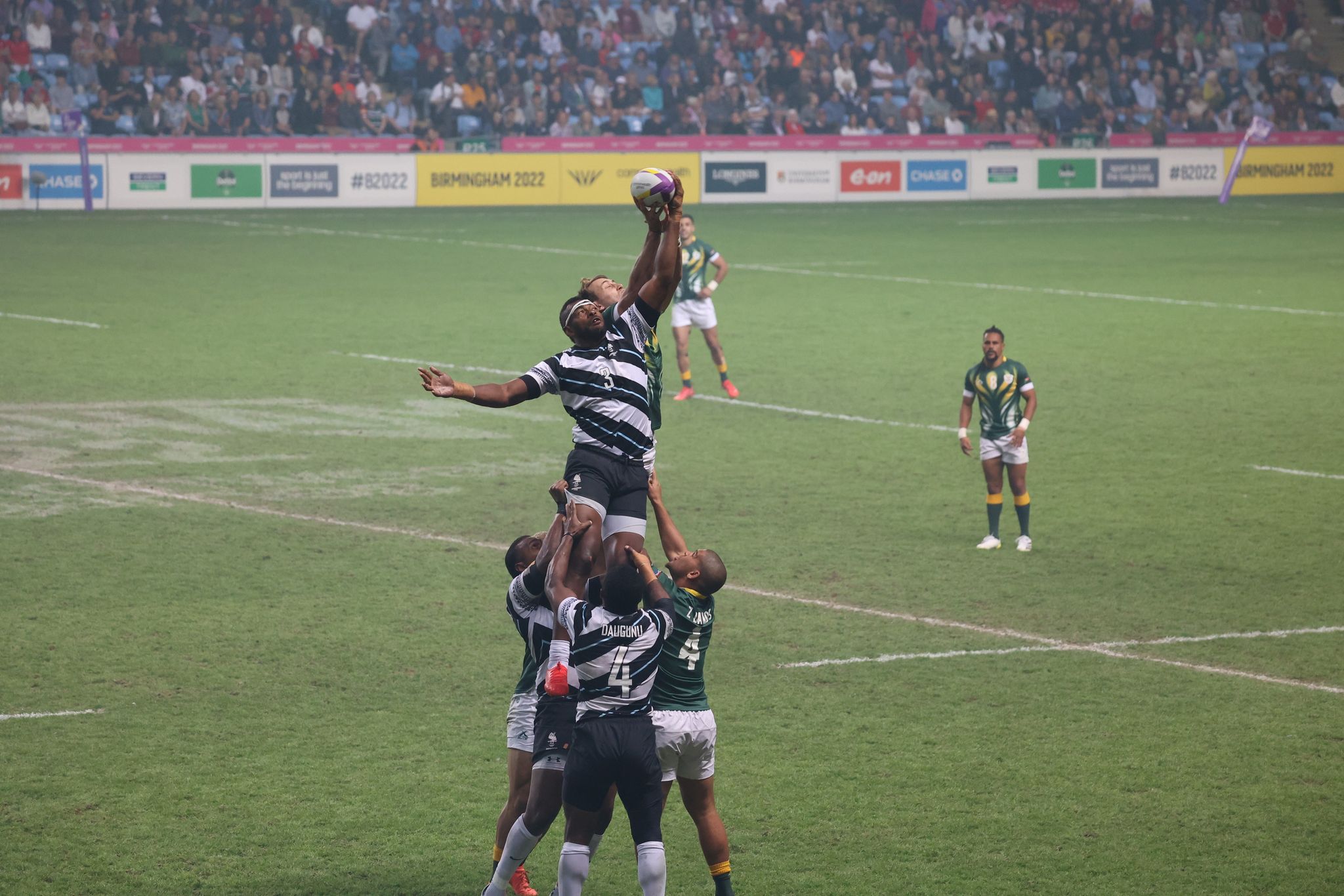 Even though we didn't bring the gold medal, "we bring silver back home and we bring the smiles back home.”

Fiji is the only country in the world to have won the Sevens Treble with their men’s team winning the Olympics, Sevens Series, and World Cup. The only title that has eluded them is the Commonwealth Games. With both the men and women dominating their games across the three days, the two talented squads had every chance of adding to their trophy cabinets as they navigated the road to the final, with the men clinching their place with an extra time win over neighbours New Zealand. On the approach to the stadium, the blue flags of Fiji waved as fans followed them around the world. Drums sounded as a festival atmosphere began to build.

Before the playoff place matches got under way, DJ Karika from Fiji entertained the swelling crowd with a DJ set that had everyone singing along. “I'm from Fiji. Both of my parents are from Fiji. It’s a beautiful country, and we're really good at Rugby, and everyone's so lovely and friendly. So if you have a chance go to Fiji,” she laughed. She was buzzing to be playing a set at the Commonwealth Games especially with her beloved country preparing for a historic moment - two finals one after the other. “Honestly, it's such an honour. I have to keep on pinching myself, it feels like a dream. So I'm very grateful for the opportunity and blessed to be here.”

Also entertaining the masses were the Coventry Dynamites cheerleading squad as the crowd gasped at their stunts, tumbles and pyramid. As brilliant as they were, the crowd were making their own fun though, with Mexican waves rippling around the stadium and chants of ‘Go, Fiji, Go’ resounding from every corner. The fireworks burst, filling the sky with colour as Fijiana and Australia women came out onto the pitch.

As flawless as they were throughout the tournament a nervy start for Fiji women saw Australia take the lead with an early try. Every time Fiji made progress, the Australian’s appeared to outnumber them. They went in at half time 17-0 down after a dominant display by Australia. In the second half, Fiji tried to make a comeback as Captain Ana Marie Roqica scored a try and the conversion was good. The crowd was delighted as they roared her all the way home. As it went to 22-12 the crowd continued to sing ‘Go, Fiji, Go’ but it was too late. After New Zealand men and women both clinched the bronze, it meant that all three countries on the podium were from Oceania. After they received their medals the three countries came together and chanted their region's name as they posed for photographers, showing us all what Oceania can do!

Speaking afterwards, Raijeli Daveua spoke of their pride after winning a Commonwealth Games silver medal. “I feel proud of myself, especially the team. We came here, our goal is to come in and win a medal. We did it. That's the main thing for us,” she said. The pride of the Oceania family shone, “We have New Zealand, Australia and Fiji. So we’re proud of ourselves. Oceania, representing our family back at home.” For Daveua, sport runs in her blood as this is the second sport she has been involved with at a high level but she shrugs off the transition. “I used to play netball.  I switched in 2016. That was my debut in 2016. Just the shape of the ball changed, nothing different.”

After the women had played their match, they stuck around to see if the Fiji men’s team could go one better. The countdown began, 10…9…8… the crowd joined in as they had done all night and came to life as the two teams began. Below the press tribunes on the same row, were South African fans, waving their flag, faces painted whilst further down the same row was a family from Fiji, again their flags were on show as the teams engaged.

It was South Africa who took the lead though, after breaking free of Fiji to score a try and conversion. It didn’t seem to be the Fijians' day as they desperately fought a determined South Africa. At 24-0, Fiji began the fight back, to the biggest reception from the crowd. The game concluded at 24-7. Not the result they hoped for but a fantastic feat nonetheless to win a silver medal at the Commonwealth Games. As they received their medals they politely kneeled as a sign of respect. At the end of the medal ceremonies the Fiji men’s and women’s teams all gathered together to congratulate each other.

Daveua summed up what it meant to the team and the nation to be taking home two silver medals and had a message for those back home. “I want to say thank you for the support and prayers, for being there for us. Even though we didn't bring the gold medal, "we bring silver back home and we bring the smiles back home.”