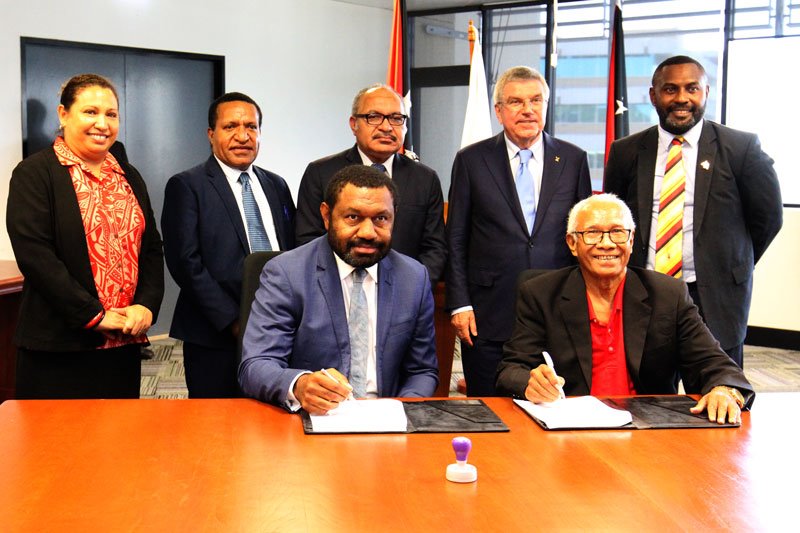 With the International Olympic Committee President, Thomas Bach and the Prime Minister and Minister for Sport, Peter O’Neill in attendance, the PNG Olympic Committee and the Government body responsible for sport in Papua New Guinea, the PNG Sports Foundation, signed an MOU capturing areas of cooperation for the two organizations.

The MOU signifies the intent of both organisations to continue the strong partnership that exists between the PNGOC and PNGSF while respecting the autonomy of the PNGOC as a sports organization and recognizing the PNGSF as the controlling Government authority for sport in the country.

Signing the MOU for the PNGOC was President Sir John Dawanincura who said, “We realize the importance of ensuring the two organizations work closely together. Our two organisations have a long history of working together on a range of programs and events, from the Pacific Games to PNG Games, with the Oceania Sports Education Program to High Performance.”

He thanked the PNG Sports Foundation and its Executive Director Peter Tsiamalili Jr. for their efforts in the drafting of the MOU with PNGOC and for their support to the IOC President’s visit.

The MOU signing was the last event on the program for the IOC President as part of his visit to the country and occurred after paying a courtesy call to the Prime Minister.

During that meeting the President Bach and the Prime Minister discussed the importance of government and sporting organisations working together and the positive role sport plays in promoting unity through diversity especially in a country as diverse as PNG.

President Bach also complimented the Prime Minister for the standard of facilities which he saw first-hand after being hosted by the NCD Governor at a reception at APEC House the previous evening and visiting the Taurama Aquatic and Indoor Centre.

It was at the visit to the TAIC where the IOC President interacted with schoolchildren and sports as part of the Olympic Values Education Program exhibition. President Bach, an Olympic Fencing golf medalist and world champion could not resist the chance to demonstrate his sword fighting talent when accepting a challenge from a local student to a fencing duel.

President Bach encouraged the children to pursue their own Olympic dreams and help build a better world through sport be following the Olympic Values of Excellence, Respect and Friendship.