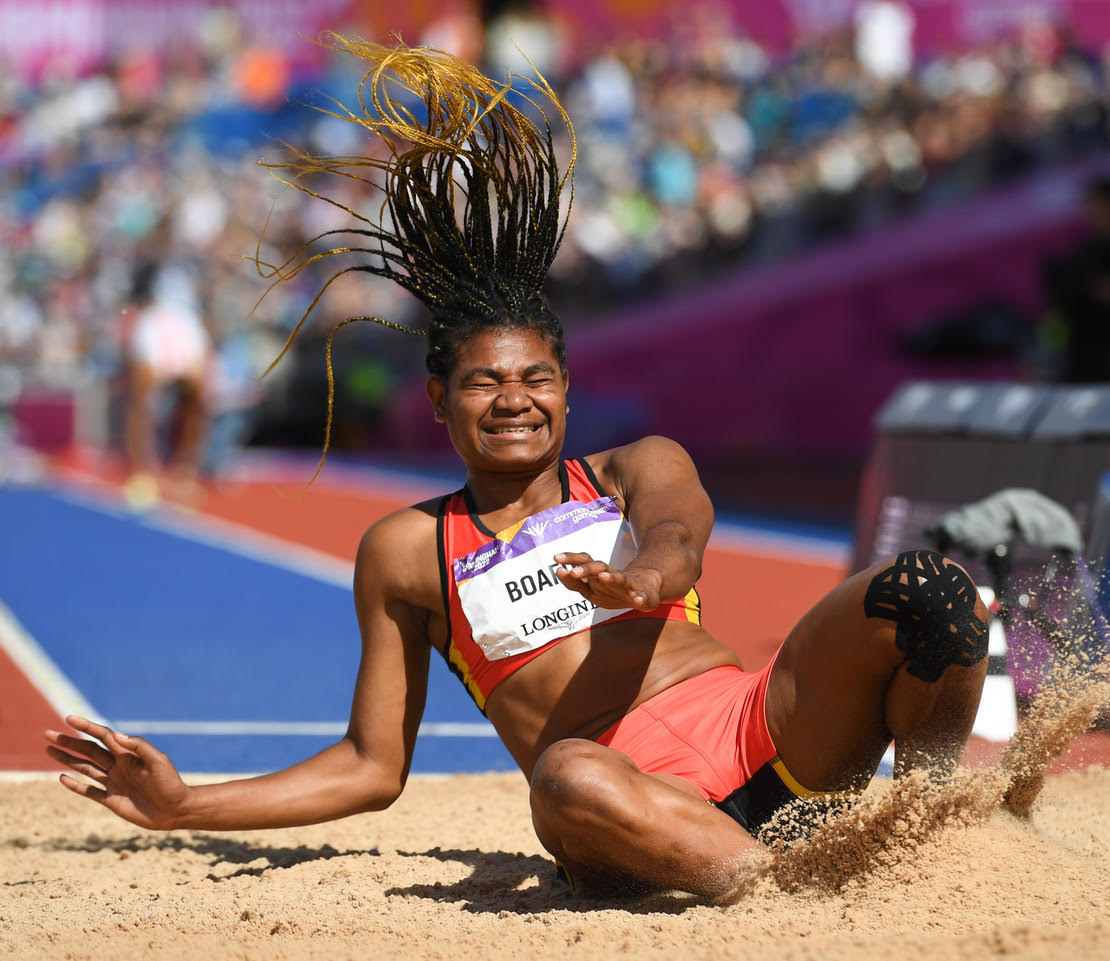 The Pacific Oceania nations were well represented at this Commonwealth Games in multi-event sports with Fiji and the Solomon Islands entering two triathletes each, whilst Papua New Guinea entered a heptathlete and a decathlete. These sports are an admirable and inspiring watch as the determination, discipline, and dedication it takes to train and be successful in more than one sport is incredible.

The Pacific Oceania nations were well represented at this Commonwealth Games in multi-event sports with Fiji and the Solomon Islands entering two triathletes each, whilst Papua New Guinea entered a heptathlete and a decathlete. These sports are an admirable and inspiring watch as the determination, discipline, and dedication it takes to train and be successful in more than one sport is incredible.

In the last few years, many of our nations have been trying to encourage young people into multi-event sports such as the triathlon and heptathlon with many coming from other sports to try it out. “We saw it on Facebook,” Fiji’s Nikotimasi Croker says, “My swimming coach said that we should give it a try. So we went for the first time and we all enjoyed it.” The first time Croker tried it, he fell off the bike after never having ridden one before. Meanwhile, teammate Rhys Cheer also came from swimming. “I was around 11 or 12, my swim club participated in one of the big triathlon events in Fiji. We just went to do the relay, swim leg and then the triathlon coach at the time, he asked me to just try it out, he saw potential and then I've been doing it ever since and I've been enjoying it.”

At 20 years old, Timson Irowane, from the Soloman Islands, found the triathlon while the majority of his friends were playing football. He discovered his passion for the sport in 2018 and “that’s when I started to train myself and do monthly competitions, making me stronger to qualify for the competitions overseas.”

It’s not just the triathlon that has recruited and encouraged its youngsters from other sports, Edna Boafob from Papua New Guinea, had a similar journey into the heptathlon. Edna not only inspired her nation but was the talking point of the Heptathlon event for many news outlets across the world. Coming to the sport from the 400m in 2019, Edna is a new face on the international stage. “Her first heptathlon was the Pacific Games in Samoa in 2019,” head coach Brett Green begins. “She was part of the team mainly for relays and then we looked at our environment and the competition and looked at the fact that there was probably an opportunity in the heptathlon for an athlete and we chose her. She was only 19 at the time.” With Edna already a competent runner, the focus was on the field events. “Phillip Newton and myself, who were coaches on the team at that stage, had to train her very quickly in the jumps and throws. But she had a reasonable point scoring and ended up actually picking up a bronze medal in her first competition.”

Edna has two trainers working with her, Brett Green and 1984 Olympic gold medallist for Australia, Glynis Nunn. Edna and coach Green talk through the training schedule and how it changes within competition. “In the mornings we work on javelin, shot put and high jump before doing the sprint workout in the afternoons.” Brett goes into further detail of his and Glynis’ roles. “I'll be working on their throws, which is my specialist area and Glynis will work across the other events.”

During the events, the coaching and training kicks in, but not just in executing the events themselves but also in the transitions between sport disciplines. “One aspect of their training is transition practice,” Maryann Moss, Fiji’s triathlete coach begins. “You just have to highlight to the athlete what you get penalised for and how many seconds. Often the penalty is bigger than the infringement, so you have to make athletes aware of these little technicalities and practice, practice, practice.”

When competing in the heptathlon or decathlon, in between throws, the athletes will talk to their coach, watching from the stands, to get advice before their next attempt. The advice and the way they communicate is also rehearsed. “We've got some really specific cues which can vary from athlete to athlete. And with those cues, it's just a reminder, just to try and get them back on focus. Particularly after, say a poor throw, it's just maybe one word to say this is what you need to focus on, otherwise there's too much going on in their head.”

The heptathlon and decathlon are unique in the sense that they take place across two days. This means that it’s a real endurance test for them and with less than a day to recover, athletes have different ways of preparing themselves for day two,” Whether getting a massage or having an ice bath, then maybe six hours sleep and go again the next day.”

Covid, of course, disrupted training and competitions, “Some of the other girls and I who are based in Papua New Guinea had to train just by jogging in the streets.” As a result, Edna’s second ever event was just four weeks ago at the Pacific Mini Games where she picked up the gold medal! So the Commonwealth Games was only her third competition overall. Here she picked up three personal bests in the High Jump, Shot Put and Javelin and a personal best overall point score. “Javelin’s come up seven metres since she first started. We went another three metres last night,” Brett gushes.

The coaches who help to train athletes in these multi-event sports have to identify the athletes’ weaknesses and schedule time to look at these in closer detail during training. Maryann Moss, team Fiji, spoke in detail about the breakdown of a typical day in the life of a triathlete. “We take one day for each event usually but sometimes we will do something like an easy session on bike, swim in the morning, and maybe cycle or run in the afternoon. Because the boys are working at different levels, I had Nico running on a separate programme working on his strength and conditioning. Ideally, you'd want to race the whole thing at least once a week but not too intense until closer to the event.”

Meanwhile, the Solomon Islands, due to resources, focus on the swimming and running elements of the sport with Timson sharing the way in which they compete and practice back home. “Sometimes we just do aquathlons, as it’s hard to complete triathlons, we just do monthly aquathlon competitions.”

According to some of the administrators, the culture can prevent some talented athletes from progressing too. “There is only one female in the team, Andriana. She is the one that is left. The other two, they are already married so their husbands don't allow them to go for training.” However, Andriana is confident that her presence at these games may help to inspire other girls into sport. “I think some of the kids when I go back, I think they’re going to say, I want to join the sport.”

These games have been a fantastic experience for these young athletes who have never competed on such a big stage before to measure themselves against the very best in the world. “In the Solomons, we don't really compete with strong athletes,” Timson says, “So I'm really happy about it, because I was competing with the top athletes in the world.” Looking ahead to their home Pacific Games both Solomon Islands triathletes are excited to grow within the world of triathlon. Timson continues, “Even if I find it hard to train on the bike, swimming, running and the transitions, it’s my passion and I love the sport, so I continue to train.”

This is one of the first games where Pacific Island nations have entered multi-event athletes and to ensure this legacy continues athletes have identified areas where the sport could use support. “We need help, especially some professional coaches to come and help my coach because he does it all by himself,” say Andriana whilst her coach would like equipment ahead of the Solomon Island hosting the Pacific Games next year.

We’ve seen the way the Pacific Island nations lift each other up and support each other like one big Oceania family during these games and these multi-event sports also foster a family vibe by their very nature. It is very different to a single sport, the physical and emotional endurance it takes is unique and only your fellow competitors can really appreciate just what you go through at this elite level. As such a bond is created, Alex Yee, the English Commonwealth Champion and Olympic medalist, took time out to share his experience and training tips with Timson whilst Flora Duffy, Bermuda’s Olympic and Commonwealth gold champion, had words of wisdom for Andriana as the pair took a selfie together. Meanwhile, Katarina Johnson Thompson, had a message for Edna and every young athlete around the world who looks up to her after winning the heptathlon, “No matter how down and out you might feel or mentally exhausted, it’s possible to just turn it around.”

The multi-event athletes that have competed at these games from the Pacific Islands have been beyond inspirational. Defeating all odds to represent their country on a global stage, achieving some of their best results of their career and paving the way for Oceania athletes to flourish in these sports in the future. The legacy they have left behind is one of endurance and determination and will no doubt encourage the next generation to take up multi-event sports.