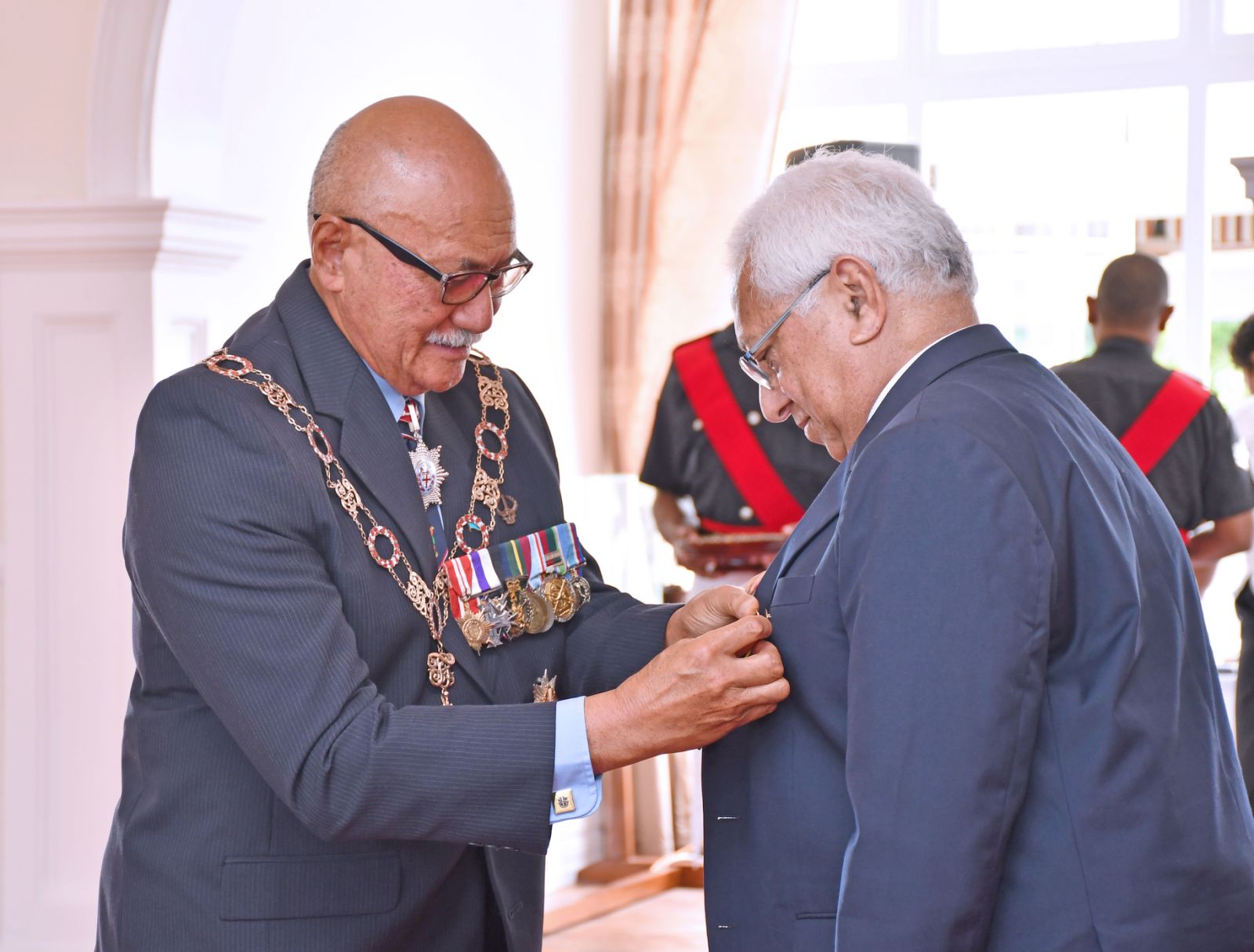 At 74 years old, Dr Robin Mitchell was among Fiji’s first 32 recipients of the 50th Anniversary of Independence Commemorative medals that were rewarded in honour of their selfless service and contribution towards Fiji’s socio-economic and political progress and development.

To be recognised and awarded by the state is an honour that very few may achieve in their lifetime. Monday October 5, 2020 was a momentous occasion for the President of the Oceania National Olympic Committees (ONOC) who has been an ambassador for Fiji in the sporting world.

At 74 years old, Dr Robin Mitchell was among Fiji’s first 32 recipients of the 50th Anniversary of Independence Commemorative medals that were rewarded in honour of their selfless service and contribution towards Fiji’s socio-economic and political progress and development.

His Excellency the Fiji President Major-General (Ret’d) Jioji Konusi Konrote bestowed the medals to the 32 recipients at the State House in Suva.

Of Rotuman heritage and from a humble upbringing in Fiji’s historic town of Levuka, the medical doctor turned renowned sports administrator has seen the birth and growth of Fiji over the last 50 years.

He was nominated by Ms Lorraine Mar, the CEO of Fiji Association of Sports and National Olympic Committee (FASANOC) for the Anniversary of Independence medal.

“I did not know about the nomination, but it was an honour to be selected, and also to look at who has travel with you, work with you over the 50 years.

“The interesting thing was, in my group there were lot of academic from USP [University of the South Pacific] and all of them are female, which is also a good achievement reflecting on the journey we took in different fields,” said Dr Mitchell.

Dr Mitchell has served sports nationally and internationally for more than four decades in various capacities as an athlete in Athletics and Hockey, a national Hockey coach, a Team Doctor and Team Manager on Team Fiji to the South Pacific Games, Commonwealth Games and Olympic Games.

“He was also the Chairman of the 2003 South Pacific Games Organising Committee, the 2007 World Hobie Sailing Championships hosted in Fiji, to the recent 2019 International Weightlifting Federation’s Junior World Championships held in Suva.

“All the events received numerous international accolades of success. Dr Mitchell is an ambassador for Fiji in the sporting world. He epitomizes diplomacy and this was demonstrated by him being appointed as the President of Association of National Olympic Committees (ANOC) in 2018, working with people of different cultures and backgrounds from around the world,” Nominator Ms Mar stated.

She said Dr Mitchell has made, and continues to make a lifetime contributions to sports, not only in Fiji but also in the wider sphere of sports regionally and internationally.

Dr Mitchell said it was motivation since early days of sport that keeps him going over more than the four decades involvement in sport.

“I guess looking at what we have done in the region, it was sort of keeps you going, because most of the athletes were probably in the same shoes as when I started sport. I remember when we were in the trials for the first south Pacific Games in 1963, we ran our race without shoes because only very few of us were with sport shoes.

It’s a story that other people have told about when they were in Papua New Guinea, in Samoa, or in Solomon Islands. We all have a common background. I think it’s a pleasure seeing how our people performed, and then you look at the IOC, all of our countries were represented there in top positions. I guess that’s an incentive that keeps you going, and then it’s so much to do that you don’t have time to retire anyway,” the 74 year old sport fanatic said.

Dr Mitchell’s father was a doctor and he wanted to follow his father’s path and moved to study medicine back then. He completed his secondary school at Levuka at form five and study science afterwards after he was awarded an overseas scholarship by the Fiji Government to study medicine in Australia and return and teach at the Fiji School of Medicine in the early 1970s.

After attaining a medical degree from the University of Adelaide he return and work as a government doctor for one year before opening up a private practice.

“While I was in general practice I was involve in the national sport, playing, and then I become the national coach, that is how all these choices came. I was computer literate very early on, and so when I first got in as a team doctor in Los Angeles, the Fiji team sees that I did these sorts of thing so got me to join the executive,” he said.

Dr Mitchell has a heart for his country. He served as the team physician for the Fiji national squad to the 1984 Olympic Games in Los Angeles, USA.

“When I was doing research, the places I could work was in Berlin, Germany and New York. But I have to come back and give back to the country. I then stopped practicing medicine because I was travelling all the time,” he said.

“So, it’s just how life happens, you do something and then you ended up somewhere else. And I find few medical colleagues were doing similar sorts of thing I’m doing,” he said.

Being an IOC executive member is the highest privilege for a sports administrator, and Dr Mitchell is the first Pacific Islander to be in the position.

He remembers well the Independence Day on 10 October 1970 when Fiji attained her nationhood from British Colonial rule.

Fiji became the 13th member of the Commonwealth during the independence. When you look at a small country like ours, it’s quite an achievement.

“The celebrations were done on Friday when British flag was lowered and Fiji flag was raised. There were quite a few people that were not happy with independence; they still want to be under British rule. Next day was a celebration of culture, and that was when Prince Charles handed over instruments of independence to the then Prime Minister Ratu Kamisese Mara,” he recalled.

Dr Mitchel said now Pacific islanders are taking positions as IOC members. The first one was Auvita Rapilla from Papua New Guinea and the other one is Palau’s Minister for Community and Cultural Affairs, Honorable Baklai Temengil.

“When you look at where we all come from, very small country like Palau, or biggest Pacific island group like Papua New Guinea, all of us come from the same journey and there’s nothing to hold anything back if they put their mind into it.

“And, although I wasn’t trained as a sports administrator I ended up doing finance and other things as I went through,” Dr Mitchell said.

As Chairman of the Olympic Solidarity Commission, Dr Mitchell is responsible for USD$500m of grants for the 206 National Olympic Committees that make up the Olympic Family.

“It’s just a path that many people are following at the moment. It’s tough, it’s not an easy life and a lot of circumstances but you can make it,” Dr Mitchel said as he encourages aspiring sport administrators in the region.

In 1995 during the country’s 25th Independence Anniversary, the then government awarded 755 Fijians the similar commemorative recognition.

“A quarter of a century ago (1995), the then Government of the day awarded 755 deserving members of our beloved Nation with a similar commemorative medal to mark our first 25 years of Independence.

“I still wear mine with great pride and hope that those of you who will be honoured with this 50th Anniversary Medal will also share with me the same proud and patriotic feeling that we belong to a nation which cares for its people and rewards them accordingly for their individual and collective efforts at nation-building,” H.E president Konrote said.