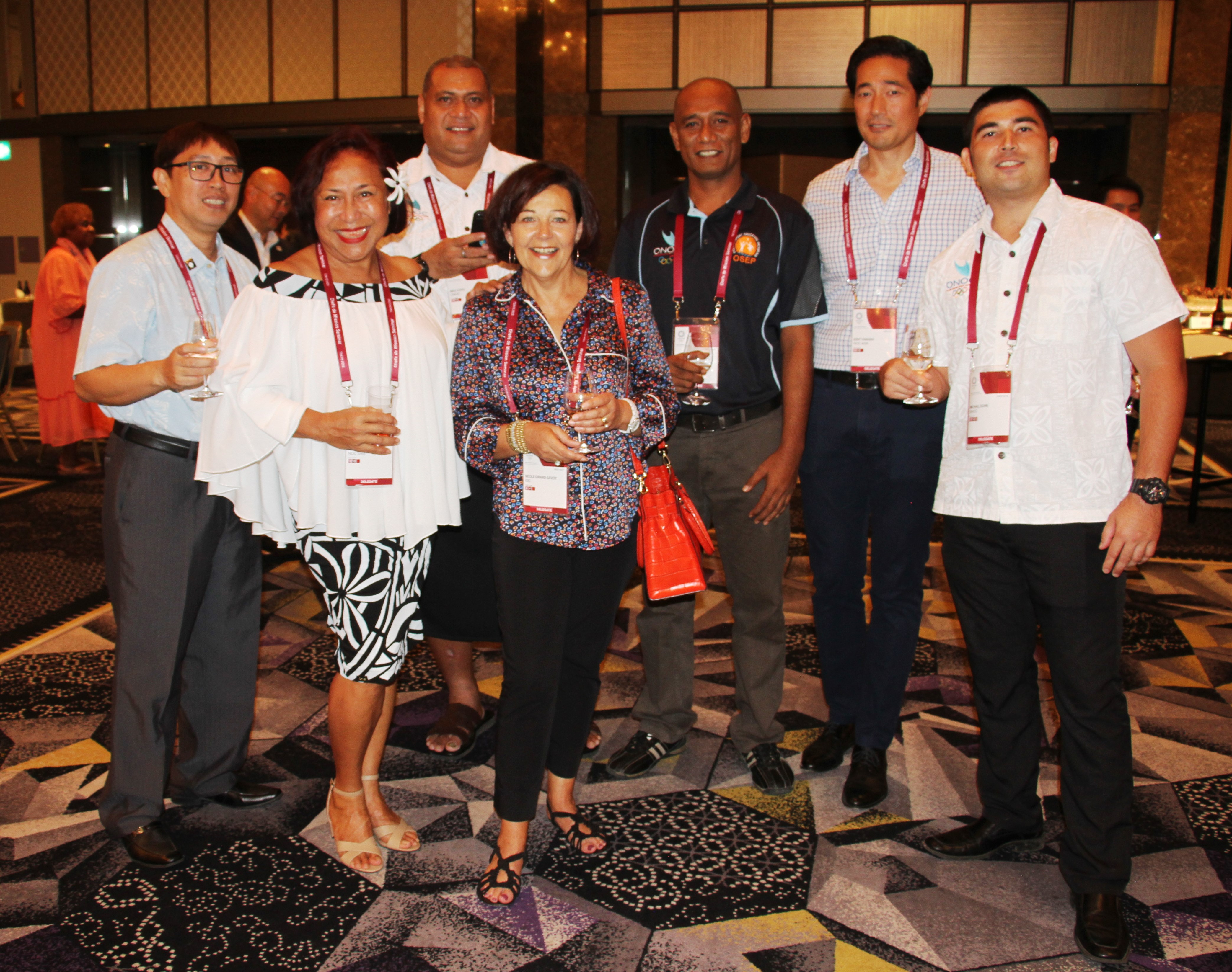 With less than a year to go over 400 representatives from National Olympic Committees (NOCs) around the world including the Chef de Missions of participating countries to next year’s Olympic games are gathering in Tokyo, Japan this week for the Chefs de Mission (CDM) Seminar hosted the Tokyo 2020 Organising Committee of the Olympic and Paralympic Games.

One-to-one meetings have also been set up to discuss and address individual needs participating countries may have. Chef de Missions from the Oceania regions 17 countries are also present in Tokyo for the seminar with venue tours a key element of the program this week.

Tours have been planned for the Olympic Stadium, Tokyo Aquatics Centre, Olympic Village as well as the Heritage Zone and Tokyo Bay Zone.

Pelma Mingii the Federated States of Micronesia’s (FSM) Chef de Mission said she’s open to learning all she can, given it’s her first role as an Olympic games CDM. “I am very honored to have been appointed to this role by the FSM National Olympic Committee and I look forward to delivering all that’s required and to the best of my ability,” Mingii added.

Vanuatu’s Eileen Nganga who is Chef de Mission and also serves on the board of the Vanuatu National Olympic Committee is impressed with the arrangements so far.

“When we arrived, we were given a taste of Japanese facilitation and their hospitality and I am very impressed with the work of the game committee,” Naganga said.

“What I really want to get out of this seminar is to find out how things are going to go next year like accommodation also competition venues and basically the services that will be offered here and what to expect next year for our athletes,” Naganga added.

The Solomon Islands has a unique situation with long-time resident of the Solomon Islands Naoyuki Fujiyama at the helm of their Olympic delegation next year. “What I want to lean here is really everything that will help Team Solomon Islands, our NOC staff and our athletes in their preparations,” Fujiyama explained.

Fujiyama who is from the coastal prefecture of Tottori in southern Honshu, Japan, has been living in the Solomon Islands for the last 29 years. He first entered the Solomon Islands as a Japanese government volunteer teaching physical education in schools.

He has been a volunteer coach for the national athletics team since the year 2000 and was part of the country’s contingent to the Sydney 2000 Olympics. “I am so lucky and I am really grateful to my NOC executives for selecting me to be the CDM for the Solomon Islands.  “I think this role is for a Solomon Islander because I am Japanese but I guess they’ve appointed me for practical reasons,” Fujiyama said.

Fiji’s Chef de Mission Patrick Bower says the Olympics is another story and although it is not going to be a huge contingent (for Fiji) like the Samoa Pacific Games, the qualification and logistics are at another level.
‍

“Tokyo hasn’t left anything to the last minute,” Bower said.  “They’ve thought the subject through, they’ve prepared the venues and have added a bonus with the provision of three cities in Japan as an opportunity for athletes to prepare ahead of the games, something that wasn’t offered in Rio 2016,” Bower explained.  “The trial run at the airport was very successful and the team is well prepared with managing the various scenarios that could take place,” Bower added. “The Organizing Committee is even talking to the airlines to see if contingents can be checked-through from the games village prior to their departure,” Bower said.

Delegates were welcomed in style on Monday night with a preview to what Japan will have on offer at games time next July.

“As the host of this event it is indeed a great pleasure to welcome you to Tokyo this year. “We have more than 200 countries and economics represented here this week,” said Toshiaki Endo, Acting President of Tokyo 2020.

“We have learnt many things from you; the NOC’s that are participating in this CDM Seminar as well the members of International Olympic Committee (IOC) in order to deliver and realize the Tokyo games to ensure all athletes are able to perform at their best,” he added.

“I would also like to mention and share with you that we have been planning for the games alongside soliciting feedback and viewpoints of athletes in our preparations, this is part of an integrated and athlete-centric approach,” Endo said.
‍

“Members of the Tokyo 2020 Athletes Commission made up of former Japanese Olympians and Paralympians have been advising us and giving us feedback on a variety of service levels,” Endo explained.

“We’ve enjoyed our work at the Coordination Commission because many of you have contributed to the process leading into what we will be discussing over the next few days,” Dr Mitchell added.