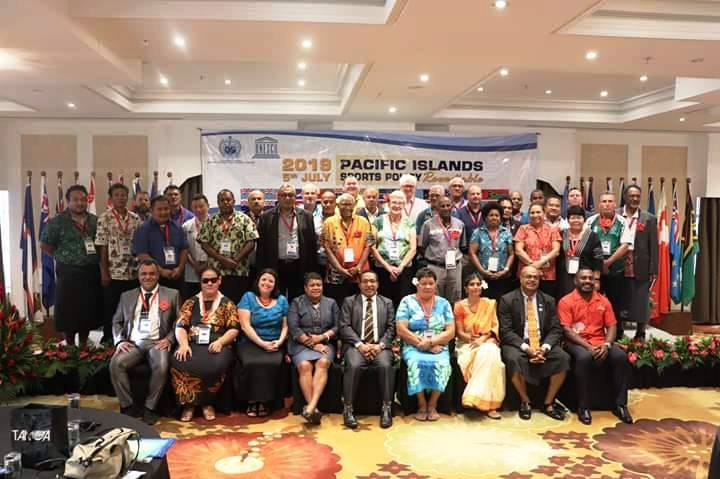 Senior officials at the Pacific Sport and Physical Activity Policy Roundtable at Sheraton Samoa Aggie Grey’s Hotel Bungalows in Apia this week were urged to include anti-doping policies in their Sports Policy.

Chairman of the Oceania Regional Anti-Doping Organisation (ORADO) Cyrille Mainguy encouraged the country officials to recognize the need to implement and to fulfill the obligation of the International Convention against Doping in Sport.

“This inclusion will also lead to more cohesion between National Olympic Committees (NOCs) and their respective governments,” Mainguy said.

Mainguy who is also the Secretary General of the Vanuatu Sports and National Olympic Committee (VASANOC) said that the meeting agreed to the proposal, noting that anti-doping is very important in the protection and promotion of the integrity of sports.

The meeting in Apia was the second roundtable, following the first one in Vanuatu in 2017. It was also attended by Samoa’s Minister of Education, Sports and Culture, Loau Keneti Sio, who is also the Pacific Games Chairman.

“This Roundtable is a platform to connect, collaborate, share good practice and work together to strengthen sports policy in Pacific Island Countries and Territories,” Loau Keneti Sio said in his opening remarks.

“Today we will discuss the latest progress in the region on national sports policy and strategic initiatives underway towards better coordination and towards targeted action to realize our shared vision for a stronger and more resilient Pacific,” Sio added.

When asked about the meeting outcomes for ORADO, Executive Officer Natanya Potoi-Ulia said it was all achieved as their proposal for anti-doping policies was reflected in the resolutions and outcome statement of the meeting.

The meeting ended with a networking session for the 170 delegates, jointly funded by ORADO together with Samoa’s Government of Ministry of Education, Sports and Culture.