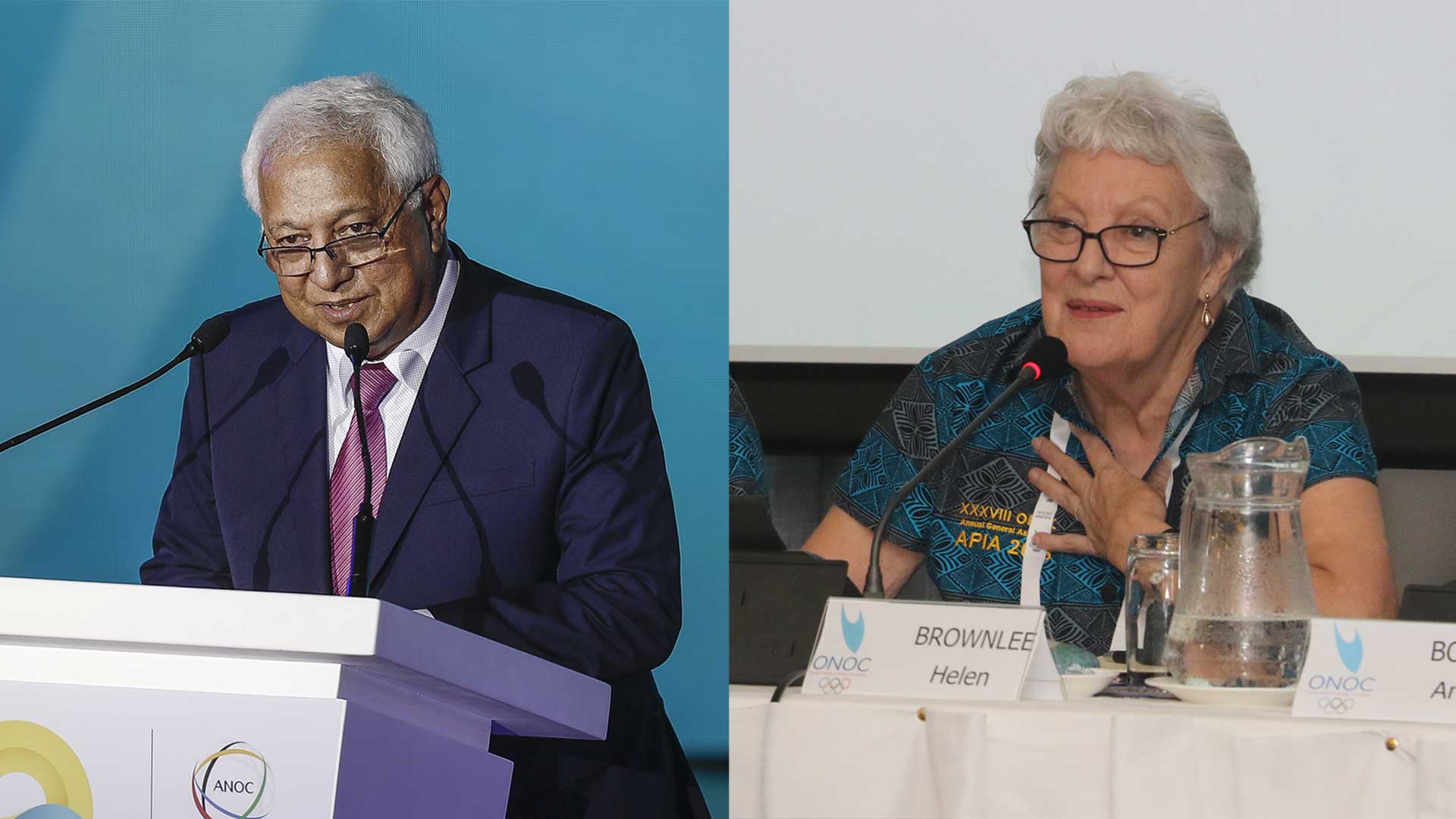 Dr Mitchell of Fiji and Ms Brownlee of Australia were among four people in the Oceania region that received awards presented by the OSFO during the 2020 OSFO virtual Annual General Meeting conducted via zoom conference on September 17, 2020.

Announcing the awards, OSFO President Kevin Gosper said the merit awards were well earned. The other two recipients were Bob Claxton for his distinguished contribution to Oceania Hockey and Michael Brown in Oceania Table Tennis.

OSFO Coordinator Chet Gray said Dr Mitchell and Ms Brownlee have both been an integral part of the sporting landscape in the Oceania region for many years.

“The OSFO Executive put forward their names for the 2020 OSFO merit award based on their distinguished service to sport in the region. Even though Dr Mitchell has been Secretary General and President of ONOC for over 20 years and Helen Brownlee has also been involved on the ONOC Executive for over 20 years, their initial involvement in the region was in sports,” Mr Gray said.

He said Dr Mitchell was heavily involved with Fiji and Oceania Athletics and Hockey over many years in the region before and during his ONOC career. Helen Brownlee was the President for Oceania Canoeing for at least the last 20 years until she stepped down two years ago to focus on her role as the Vice President of the Australian Olympic Committee (AOC) and member of the ONOC Executive.

“Based on the OSFO Merit Award criteria both Dr Mitchell and Helen Brownlee have had many years of sport involvement in the Oceania region. Their nominations are very worthy,” Gray said.

“President Mitchell’s award is in recognition for the support he has given regional federations and his on-going efforts to promote regional sports, towards a common goal of ‘excellence in sport’ and the Olympic Movement,” ONOC Secretary General Ricardo Blas said.

Commenting for Guam, Blas said, “Helen Brownlee, while fighting a personal arch nemesis, continues to excel and use her strength to fight for “gender equity” within and beyond the Oceania region.

“Helen has also been steadfast in pursuing members of the ONOC family to join her in her campaign for gender parity within our sporting families and at all levels of sports administration,” Secretary General Blas added.

Award recipient, ONOC President Dr Mitchell said the award came as a surprise because he didn’t realize that OSFO had started the merit awards. But said he is grateful and proud to receive it.

“It’s an honor to receive the recognition from OSFO,” said Dr Mitchel who began his involvement in sports in 1984 as team physician for Fijian athletes to the Olympic Games, Commonwealth Games and South Pacific Games.

Going forward, Dr Mitchel said ONOC’s main focus is to increase the standard of Oceania athletes and to have more teams going to the mini games and also to the Pacific and Commonwealth Games.

“In the short term, it is to support the Solomon Islands, in particular the National Olympic Committee of Solomon Islands (NOCSI) to make sure the 2023 Pacific Games go ahead and that their sporting facilities are of games standards.

“Our main focus is to support the games and to support the athletes throughout the region. And we also want to improve the education of officials so that we have more qualified coaches in the region and don’t need to spend so much on recruiting overseas coaches,” Dr Mitchell said.

“We also want to make sure that our NOC Presidents and Secretaries General are trained and equipped and to run their organisations well,” Dr Mitchell added.

OSFO was officially established in Brisbane in March 2005. It unites regional sports federations with the main objective of representing their interests to ONOC, the IOC, governments and other sporting stakeholders.

The OSFO Merit award was introduced in 2017, and has eight specific criteria to satisfy to qualify for the award.

The first criteria states that, “a Merit Award may be granted to a member of an affiliated Member Federation or Associate Member Federation who has rendered distinguished service to the Organisation of Sports Federations of Oceania (OSFO).

The third, “the Awardee should have rendered distinguished service for a period of not less than eight (8) years”.

The fourth, “a nomination in any year for a Merit Award shall be submitted to the OSFO Executive together with a written report outlining the services rendered by the nominee”.

Sixth, “OSFO Merit Awards will be awarded annually to no more than four (4) nominees across the sports in the Oceania Region”.

The seventh criteria states that “a Merit Award will be granted to the nominee if the nomination receives a two-third majority of votes cast at an OSFO Executive meeting in favour of the nomination and confirmed at the General Assembly.

The eighth and final criteria is “a recipient of a Merit Award shall be awarded a plaque of a design approved by OSFO”.