Commission reassures athletes of Oceania in these unprecedented times 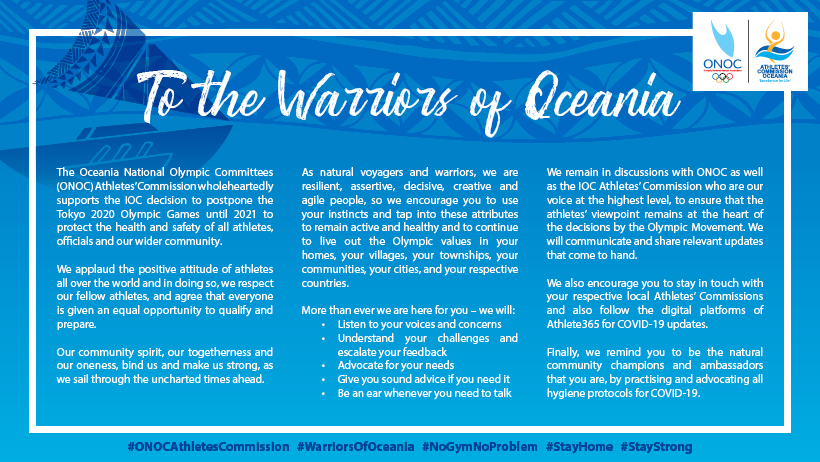 30 March, (ONOC MEDIA) – The ONOC Athletes’ Commission today released a message to affirm and encourage its membership amidst these trying times.

“All of us are connected through the Ocean. Now, more than ever, we need to support each other through these difficult times by showing solidarity,”Chairperson of the ONOC Athletes ‘Commission, Karo Lelai said today.

“Despite borders, we are all Pacific people and part of the global village,” she mentioned.

The statement applauds the positive attitude of athletes all over the world and reinforces the togetherness and oneness, the peoples of Oceania are renown for.

“As natural voyagers and warriors, we are resilient, assertive, decisive, creative and agile people, so we encourage you to use your instincts and tap into this attribute to remain active and healthy and to continue to live out the Olympic values in your homes, your villages, your townships, your communities, your cities, and your respective countries,” the Commission detailed in their statement.

“We remain in discussions withONOC as well as the IOC Athletes’ Commission who are our voice at the highest level, to ensure that the athletes’ view point remains at the heart of the decisions of the Olympic Movement. We will communicate and share relevant updates that come to hand.

“We also encourage you to stay in touch with your respective local Athletes Commissions and also follow the digital platforms of Athlete365 for COVID-19 updates,” the statement said.

“It is now time to put your health and that of your family and community first,” Lelai added.

“We have prevailed through natural disasters and other diseases and we will do so with COVID-19.

Established in 1981the Oceania National Olympic Committees (ONOC) is one of five ContinentalOlympic Associations that looks after the interests of 17 member nations in thePacific Region including Australia and New Zealand as well as seven associate members.

ONOC has an office in Guam where Secretary General Mr. Ricardo Blas is based and the Secretariat in Suva, Fiji, where the Office of the President Dr.Robin Mitchell is located.

All services and programs are based on the ONOC Strategic Plan for2018-2021, and its 4 Core Functions of (1) Building and Strengthening NOCsCapacity (2) Cultivating Strategic Partnerships (3) Contributing towardsSporting Excellence and (4) Leading by Example.

About the ONOC Athletes’ Commission

The Commission serves as a link between the athletes of Oceania and theONOC Executive, to ensure that the athletes’ voices are heard at all levels of decision making.

The Commission has been recognised globally for numerous trailblazing activities including the signature “Voices of the Athletes” (VOA) program.

Similar Commissions are set up to provide a platform for a unified“Voices of the Athletes” in all 17 National Olympic Committees (NOCs) inOceania.